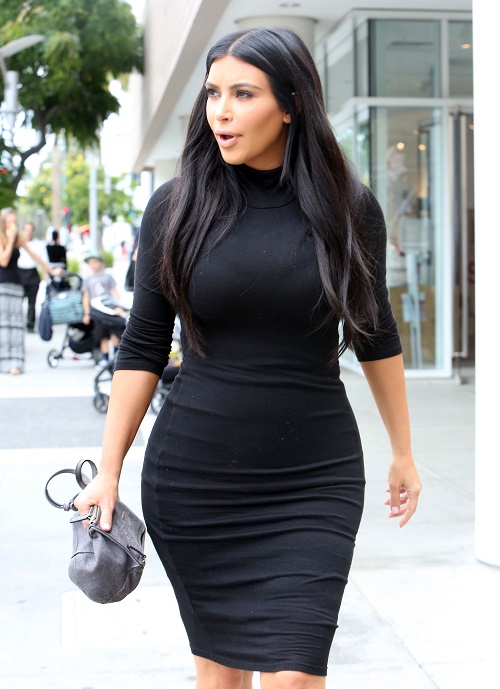 Pregnant Kim Kardashian is currently dealing with bouts of morning sickness and naus – but Kanye West wants her to look red carpet ready always! Her inconsiderate husband, Kanye West, is not cutting her any slack, he expects her up and out of bed and parading around town in stilettos and tight dresses, regardless of how horrible she feels. It’s not a secret that Kanye West dresses his wife Kim Kardashian like she is a doll. You would think that he would cut her a little bit of slack considering that she is pregnant with his baby boy – but that’s not the case.

The June 22 edition of Life & Style Magazine reveals that despite how uncomfortable Kim is with her baby bump tucked inside the absurd clothes that Kanye picks out for her, there isn’t much chance of her saying “no” to her husband anytime soon and rocking some maternity clothes. L&S goes on to reveal, “Kim never says no to controlling Kanye, and already this pregnancy promises to be more uncomfortable (and embarrassing) than the last, with Kanye dressing Kim in unflattering outfits that have already raised eyebrows and sparked criticism.”

Despite Kim complaining about how sick she was on social media on June 2, Kanye had her strapped in to some stiletto heels and wearing a skin-tight latex dress for the red carpet at an event in Tennessee. And this is just the beginning! Kim is in for several long and grueling months of uncomfortable clothes and painful shoes, and the internet is already making fun of her absurd pregnancy clothes. An insider dished to Life & Style Magazine, “Kanye says all of the negative comments are just haters who are jealous of him and Kim’s fame. Kim isn’t so sure of that, but she will do anything for her man.”

Do you feel sorry for Kim Kardashian and the ridiculous outfits Kanye West puts her and her baby bump in? Or is it her own fault because she won’t stand up to him and tell him no? Let us know what you think in the comments below!