Kim Kardashian Is Having A Baby Breakdown as Kanye West Abandons Her! (PHOTO) 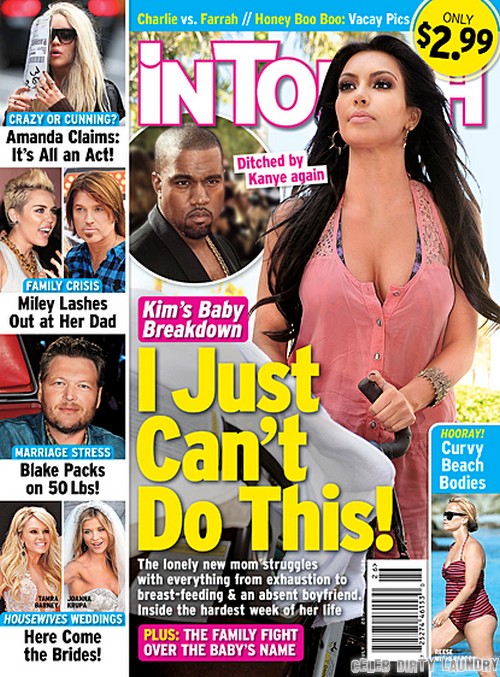 The latest cover of In Touch magazine features Kim Kardashian in all of her fugly glory. The tagline, “I Just Can’t Do This Anymore”, is splashed across the front page, just below Kim K’s bouncy bosom. According to the magazine, the cocky charlatan is having a “baby breakdown” of epic proportions; mostly due to Kanye West’s absenteeism. A source reveals, “Kanye’s entire focus is on his new album right now. He will do anything to ensure this album is a success. He will fly all over the world to promote it. Kim and the baby are not his priority.”

Another dreadful damsel in distress had a “pregnancy scare”. The magazine reveals that Britney Spears and her new BF, David Lucado, “briefly thought they were expecting a baby”, mere months before Planet Hollywood begins a multimillion-dollar construction project for Brit-Brit’s Las Vegas residency. According to an insider, “If she was pregnant, that would’ve been the end of her Vegas deal.”
Oh Britney, you shouldn’t tease us so with your benign baby bumps!

The baby theme continues with our favorite Hollywood horror, Amanda Bynes. This childish idiot now claims that her bizarre actions are all part of a fame-ridden PR campaign. The rich witch texted publicist Jonathan Jaxson (she denied ever knowing him) and revealed – just like Harry Houdini – that the above mentioned madness is all part of an act. Psychologists claim otherwise. “If this were an act, she wouldn’t be telling us about it. There’s a part of her that’s aware of what she’s doing, and it scares her. Saying it’s all an act is her attempt to regain control of an out-of-control situation,” says LA-based psychologist Julie Armstrong.

And last but not least, we have Blake Shelton drinking drama from a bottle of whiskey. In Touch purports that the country singer’s failing marriage is turning him into an alcoholic. “His drinking is pretty hardcore. He seems to drink all day, every day,” an insider reveals.
Country and cuddles don’t go well together it seems.

If you’re interested in reading more about Hollywood’s hobos, head down to your local store and purchase a copy of In Touch’s latest issue. Scandals and secrets are only a page or two away!