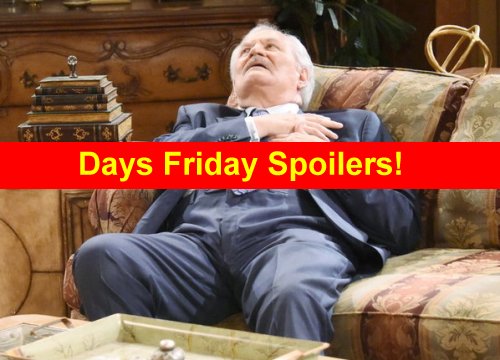 “Days of Our Lives” spoilers for Friday, December 4, reveal that Ben (Robert Scott Wilson) will finally reach his limit. Chad (Billy Flynn) and Abigail (Kate Mansi) tried to convince Ben that everything would be fine if he let them get out of there alive.

Unfortunately, Chad went for Ben’s gun and ended up getting bashed in the head again. Ben tried to strangle Chad as Abigail watched in horror, but it looks like he’ll decide to swap his killing method.

Ben would undoubtedly prefer a slower, more torturous death for his rival. The same goes for his cheating fiancée. DOOL spoilers say Ben will insist they can be together forever as he chains them to a bed and lights it on fire.

Next week on “Days,” Chad will manage to get free and carry Abigail out of the blaze. However, this nightmare isn’t over. JJ (Casey Moss) and Lani’s (Sal Stowers) search for Abigail will soon turn into a hunt for Ben and the baby.

Back in Salem, DOOL spoilers tease that Hope (Kristian Alfonso) will take drastic action to get Dr. Malcolm (Adam Leadbeater) to talk. Rafe (Galen Gering) and Hope have been pulling a “good cop, bad cop” act – mostly because Hope refuses to follow protocol.

Hope will continue to break the rules when she pulls a gun on Dr. Malcolm and threatens to shoot if he doesn’t cooperate. Rafe will intervene once things get out of hand. It seems everyone is growing a little concerned about Hope’s behavior.

Later, Roman (Josh Taylor) will take Hope’s gun away. It’s probably best if Hope stays unarmed for a while. In fact, Roman will eventually force Hope to take a leave of absence.

Other “Days of Our Lives” spoilers indicate that Caroline (Peggy McCay) will have a startling vision. Caroline will fear that Victor (John Aniston) could be in grave danger. It appears Caroline will predict a heart attack for her former flame.

Victor may be hesitant to believe a medical crisis is imminent, but he should definitely get checked out. Caroline’s visions are typically spot-on. Stick with “Days of Our Lives” for updates on Victor’s potential health scare.

So “Days” fans, what do you think about the news that Ben will leave Chad and Abigail to die in the fire? Will Ben pay for all his crimes? Will Hope get a grip or settle the score? Can Caroline persuade Victor to seek medical attention?