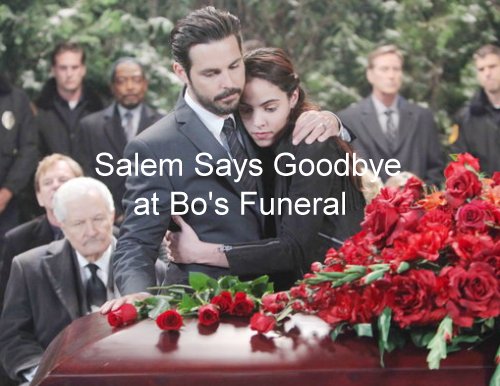 “Days of Our Lives” spoilers for the week of November 30-December 4 tease that some explosive moments are coming up. The search for Abigail (Kate Mansi) will continue as Chad (Billy Flynn) heads to Smith Island.

Despite a massive snowstorm, Chad will manage to find the cabin where Abigail is being held captive. DOOL’s weekly promo video shows Ben (Robert Scott Wilson) pointing a gun at Abigail’s head as he prepares to end her life.

Chad will burst in and stop Ben from doing the deed. However, Chad and Abigail won’t be out of the woods yet. In fact, this situation is about to get much worse. Ben will become fed up with the little love fest going on between Abigail and Chad.

After chaining them to the bed, Ben will insist that they’ll get their wish. They can be together forever. Chad and Abigail will watch in horror as Ben drenches the bed with gasoline. It’s clear that Ben has had enough of Abigail’s feelings for her ex.

“Days of Our Lives” spoilers reveal that Ben will pull out a lighter and start a fire that’s sure to spread quickly. As Abigail and Chad cry out for help, Ben will cradle the baby in his arms and say “Bye, Mama.”

Could Ben possibly get any more ruthless? Ben forced Abigail to endure a difficult labor in the middle of nowhere and now he’s going on the run with her son. It seems Ben plans on adding two murders and another kidnapping to his list of crimes.

Back in Salem, we’ll see the aftermath of some crimes of the heart. “Days” spoilers say Belle (Martha Madison) will try to explain what caused her marriage to crumble. John (Drake Hogestyn) and Marlena (Deidre Hall) will be stunned to learn about Belle’s affair.

Later in the week, Shawn (Jason Cook) will declare that things are officially over between he and Belle. A distraught Belle will be forced to let Shawn walk out of her life. This isn’t good news for “Shelle” shippers.

We’ll also see Bo’s (Peter Reckell) family and friends gather to say goodbye. DOOL spoilers indicate that there won’t be many dry eyes as Bo’s funeral gets underway. Bo’s death was heartbreaking and his loved ones will never be the same.

Still, the show must go on. Hope (Kristian Alfonso) will use vengeance to fill the void while Ciara (Vivian Jovanni) finds other methods of coping. Stick with “Days of Our Lives” for updates on the Bradys’ attempt to move forward.

So “Days” fans, what do you think about all the action ahead on the NBC soap? Voice your opinion in the comments below and don’t forget to check CDL often for the latest “Days of Our Lives” spoilers, updates and news.