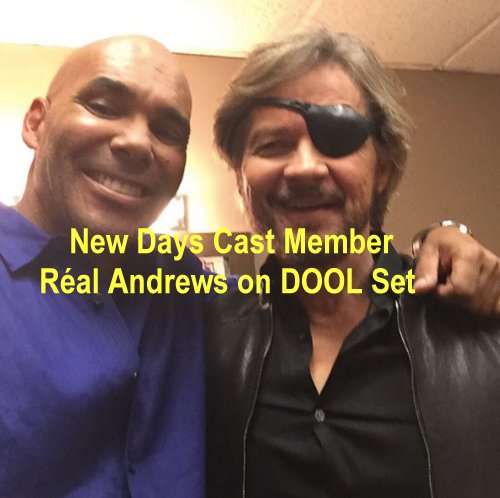 “Days of Our Lives” (DOOL) spoilers include news that “General Hospital” alum Réal Andrews has been spotted on the DAYS set. Andrews’s character’s name and storyline are a secret that have yet to be revealed.

On November 11, Réal let fans know on Instagram that he was headed for DOOL. “I am back. Thanks for all your support. Stay tune for details. Thank you Jesus #soapoperas #daysofourlives #generalhospital #gh #Advocare.”

The actor posted a snapshot of himself with a big smile and a thumbs up while in a car that appears to be on the lot where “Days of Our Lives” is shot. Remember, the daytime drama tapes approximately six months in advance.

If Andrews began shooting scenes in mid-November, fans should expect to see the mystery man in Salem sometime in April or May 2016. Back in October 2015 a vague casting call went out for two short-term male roles for the NBC soap opera.

Both characters are in the late-30s to mid-40s – one is described “gorgeous” and the other as a “hot bad boy.” The working names for these newest additions to the “Days of Our Lives” cast are “Hal” – the father of a 19-year-old girl and “Clark.”

Réal Andrews fits both descriptions, which means the actor may be either character. Or the casting call for two male roles may have been a smoke screen for only one. There is no information regarding the storyline in which Réal will be involved.

During Andrews’ time on GH, he portrayed Detective Marcus Taggert – has Réal been cast in another law enforcement role? Could “Hal” or “Clark” be the one who will track down Necktie Killer Ben Weston (Robert Scott Wilson)?

Andrews could also be brought in as an enforcer for Andre DiMera (Thaao Phenglis) and Stefano DiMera (Joseph Mascolo). What do you think “Days of Our Lives” fans? How will TPTB write “Hal” and/or “Clark” into the DOOL storylines?

We’ll just need to sit tight and wait to see what the writers have in store for the newest resident of Salem. Let us know what you think in the comments section below and come back to CDL for all your “Days of Our Lives” spoilers, soap news, and updates.