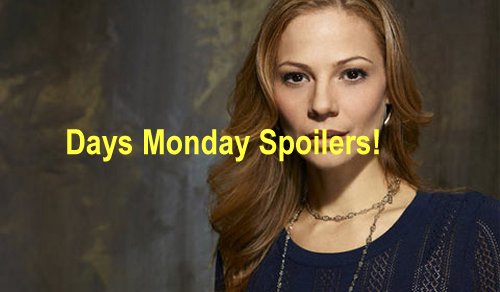 “Days of Our Lives” (DOOL) spoilers for Monday, November 30, tease that Hope (Kristian Alfonso) will begin to unravel as she proceeds with her plot for vengeance. Steve (Stephen Nichols) will realize that Hope (Alfonso) means business and he’ll give her a hint to get her started.

This whole revenge scheme could put Hope in peril, but Steve knows she can’t be stopped. DOOL spoilers say Steve will provide a clue for Hope’s investigation. It sounds like Steve’s tip will be helpful.

Later this week, Hope will have urgent questions for Claudia (Anya Monzikova), the woman who was paid to lure Bo (Peter Reckell) by posing as Britta Englund’s (Amy Stock) daughter. This is just the beginning of Hope’s mission to make Bo’s captors pay the price for their actions.

In the meantime, Steve will have to deal with potential danger from his anonymous stalker. Steve and Kayla (Mary Beth Evans) are growing concerned by all the cryptic messages and veiled threats that keep coming their way.

It’s tough to fight a faceless enemy, but it appears Steve will know who he’s dealing with soon enough. “Days of Our Lives” spoilers indicate that the stalker’s identity will be revealed on Monday. Probably only viewers will know initially, but Steve will learn the details soon enough.

Based on a recent DOOL promo, it looks like Ava Vitali (Tamara Braun) is our mystery woman. Ava has always had an obsession with Steve and she’s back to stir up trouble once again.

A rep for “Days” announced that Ava would be back on December 9, but it’s possible that we’ll get a glimpse of her earlier. The same thing happened with Bo’s return.

Of course, it’s also possible that her name will simply be exposed or we’ll see one of her minions. Whatever the case, you can bet that Ava will continue to create some interesting predicaments for Steve and Kayla.

Elsewhere, Chad (Billy Flynn) and Rafe (Galen Gering) will learn crucial information that will help them figure out Abigail’s (Kate Mansi) location. A tip will come in about the midwife Ben (Robert Scott Wilson) contacted on Smith Island.

Chad will freak when he realizes that Abigail went into labor while in captivity. Chad was already concerned about Abigail and now he’ll have to worry about her child’s life, too.

It seems Chad’s fears will drive him to save Abigail and make Ben sorry he ever laid a hand on her. Unfortunately, Ben will have other plans. Stick with “Days of Our Lives” for updates on Ben’s reign of terror.

So “Days” fans, what do you think about Steve’s clue for Hope? Will Hope put this puzzle together? Will Steve and Kayla get tangled up in Ava’s mess? Will Chad and Abigail survive Ben’s next round of rage?