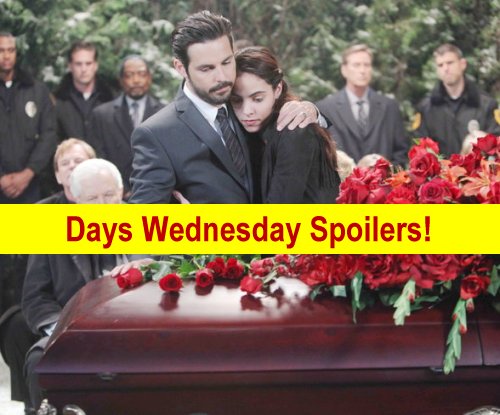 “Days of Our Lives” spoilers for Wednesday, December 2, tease that Bo’s (Peter Reckell) funeral will get underway. It’s time to say a final goodbye to the beloved character, but many DOOL viewers will keep the fond memories.

Losing Bo is tough, but the show has to move on. It looks like Shawn (Jason Cook) is about to move on, too. “Days” spoilers indicate that Wednesday is Jason Cook’s last airdate. Shawn will bid Belle (Martha Madison) farewell and head home.

Fortunately, Shawn won’t be off canvas forever. Brandon Beemer will be taking over the role in January when Shawn returns to Salem. In the meantime, Hope (Kristian Alfonso) will try to support Ciara (Vivian Jovanni), but she hasn’t lost sight of her revenge plans.

“Days of Our Lives” spoilers reveal that Hope will manage to find Claudia (Anya Monzikova) and bring her in for questioning. Things will get heated as Hope grills Claudia about the people responsible for Bo’s kidnapping.

We don’t know for sure where the rest of Hope’s journey will take her, but it appears all roads lead to the DiMeras on the NBC soap. There’s a good chance they played a big part in what happened to Bo.

Even if they didn’t, Hope is going to end up blaming Stefano (Joseph Mascolo) and his posse eventually. Other DOOL spoilers say Abigail (Kate Mansi) will be in a desperate fight for her life as Ben (Robert Scott Wilson) spirals out of control.

Ben is losing touch with reality and the situation is growing dire. Abigail has been trying to talk some sense into Ben, but he just won’t listen. To make matters worse, Ben doesn’t trust Abigail and we all know what happens to people he can’t trust.

Ben will grab his gun and get ready to shoot the woman he once claimed to love. Abigail will beg Ben to reconsider, but it’s clear that he’s had enough. Luckily, Chad (Billy Flynn) will show up to stop the deadly deed, but he won’t quite be able to gain the upper hand.

Stick with “Days of Our Lives” for updates on Ben’s cruel actions. So “Days” fans, what do you think about the news that Salem will say goodbye to Bo? Will you miss Jason Cook as Shawn? Will Hope get any answers from Claudia?

Can Chad and Abigail handle Ben on the brink? Let us know what you think in the comments below and don’t forget to check CDL often for the latest “Days of Our Lives” spoilers, updates and news.