Days of Our Lives (DOOL) Spoilers: Abigail Catches Chad and Belle in Bed Together! 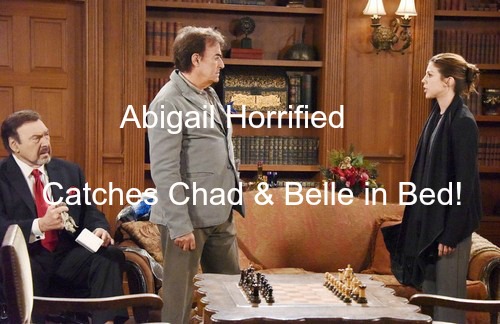 “Days of Our Lives” (DOOL) spoilers reveal that Abigail (Kate Mansi) will be puzzled by the whole situation with Chad (Billy Flynn). Abby has been blaming herself for what happened between them, but she’ll soon decide it isn’t her fault.

In fact, Abigail will start to suspect that Chad may not be responsible for his actions either. Stefano (Joseph Mascolo) and Andre (Thaao Penghlis) won’t offer much help when Abigail confronts them. However, Marlena (Deidre Hall) could provide a few clues about Chad’s ordeal.

DOOL spoilers tease that Abigail will ask Marlena some questions about what occurred that morning. Once Abigail hears the details of Marlena’s interactions with Chad, she might have a lightbulb moment. Unfortunately, it seems Chad won’t snap out of his trance just yet.

Chad’s pursuit of Belle (Martha Madison) will continue and “Days” viewers may be surprised by just how far he’s willing to go.

As the Basic Black fashion show gets underway, Belle will show up with a date. Perhaps Philip (John-Paul Lavoisier) will accompany his old flame to the event. Whatever the case, “Days of Our Lives” spoilers say Belle won’t leave with the same man she arrived with.

After the fashion show comes to a close, Belle will end up with Chad. To make matters worse, Abigail will catch them in bed together! Poor Abby is in for another major shock when she sees what a creep Chad has become.

Luckily, we know that Chad and Abigail will get things sorted out. DOOL spoilers indicate that their relationship will get back on track in the near future. A proposal is imminent, which means we could hear wedding bells for these two before long.

Of course, there will undoubtedly be more problems ahead. Chad will try to dupe the DiMeras, but that sounds like a risky scheme.

Andre won’t be pleased when he inevitably realizes that Chad has turned against his family. Once the truth is finally revealed, there may be an all-out war between these brothers. Stick with “Days of Our Lives” for updates on the bitter battle to come.

So “Days” fans, what do you think about the news that Marlena could give Abigail some hints about Chad’s mysterious behavior? Will Abby figure out that Andre brainwashed Chad? What about Chad and Belle’s bedroom shocker?

What will Abigail do when she finds them together? Let us know what you think in the comments below and don’t forget to check CDL often for the latest “Days of Our Lives” spoilers, updates and news.