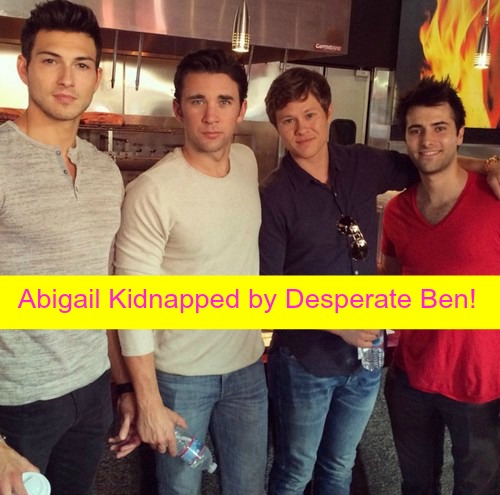 “Days of Our Lives” (DOOL) spoilers tease that Abigail (Kate Mansi) will finally uncover the shocking truth about her fiancé. When Abigail finds startling evidence on Ben’s (Robert Scott Wilson) phone, she’ll barely be able to believe what she’s seeing. DOOL viewers will remember that Ben threw his phone in a fit of rage just before he killed Will (Guy Wilson). It’s possible that a video was accidentally recorded of the murder.

Then again, Abigail might find something as simple as “red neckties” listed in Ben’s search history. Maybe Ben used his phone to do a little research before he placed his order. Whatever the case, Abigail’s heart will sink when she learns that the man she loves is a ruthless murderer.

Ben will lash out in anger when he realizes that Abigail knows too much. We can’t forget that the main goal of Ben’s killing spree was to hold onto Abigail. Once Ben’s relationship with Abigail is in real jeopardy, he’ll completely snap. “Days of Our Lives” spoilers say Ben will refuse to let Abigail go.

It seems Ben is determined to make sure Abigail is his and his alone. Of course, that can’t happen if Abigail goes to the police. With that in mind, Ben will decide he only has one option.

“Days” rumors have been hinting for months that Ben would kidnap Abigail and we now have confirmation that it’s coming soon. Abigail will frantically try to escape, but it’ll be no use. Ben will force Abigail to come with him to the Horton cabin on Smith Island. It looks like Ben plans on keeping Abigail locked up there for a while until he can figure out his next move.

Naturally, Abigail will be terrified of what Ben might do, but she’ll try to keep her cool. Right now, Abigail has to focus on protecting the life of her child. Down-the-road DOOL rumors suggest that Abigail will give birth prematurely. It appears the stress of this ordeal could send her into labor at some point. Stick with “Days of Our Lives” for updates on Abigail’s fight to keep her baby safe.

So “Days” fans, what do you think about the news that the long-awaited kidnapping will occur? How will Abigail get out of this mess? Will Abigail’s child be in danger? Let us know what you think in the comments below and don’t forget to check CDL often for the latest “Days of Our Lives” spoilers, rumors, updates and news.