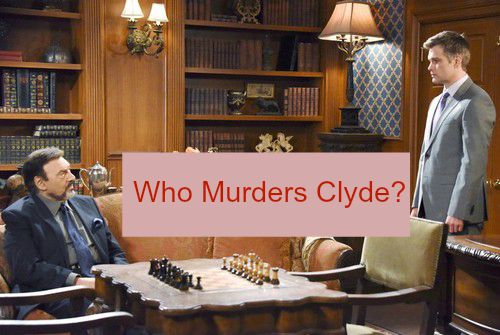 “Days of Our Lives” spoilers tease that Chad (Billy Flynn) will soon feel like he’s backed into a corner. Chad wants to prove his innocence, but it sounds like things won’t go as well as he’d hoped. With nowhere else to turn, Chad will realize Stefano (Joseph Mascolo) is the only person who can help him. Stefano has secret tunnels and anything else Chad might need to fly under the radar. Chad had a brief tiff with Stefano recently, but he’ll be back in Stefano’s good graces before long.

Once Chad is hiding out at the DiMera mansion, he’ll return his father’s favor by teaming up for a new plot. DOOL spoilers say Stefano will decide he’s had about enough of Clyde (James Read) and all his antics. This hillbilly from Poplar Bluff may think he can strut around Salem like he owns the place, but he’s sadly mistaken. Stefano is the chief villain in this town and he won’t let a chump like Clyde push him around.

Clyde seems to think he’s untouchable, but that’s probably part of Stefano’s plan. Perhaps Stefano has been letting Clyde believe he’s in control so he can blindside him when he least expects it. Speaking of blindsiding, it appears Clyde could face surprise ambushes from even more Salemites. We can’t forget that JJ (Casey Moss) is on a mission to put Clyde away. “Days of Our Lives” spoilers reveal that JJ will decide to get sneaky to catch Clyde off guard.

Of course, Clyde has another enemy that will be out for revenge. “Days” viewers know that Aiden (Daniel Cosgrove) still wants vengeance for Clyde’s brutal attack. DOOL spoilers hint that Aiden will devise a scheme to make Clyde pay. With so many people out to get Clyde, it’s just a matter of time before someone succeeds. The question is: who will be the one to finally rid of us slick Mr. Weston?

There are a few rumors floating around that Aiden might try to settle his debt with Stefano by agreeing to take care of Clyde. Why not? Aiden would love to kill Clyde anyway and this would undoubtedly get Stefano off his back. Aiden would be killing two birds with one stone. Clyde should be exiting within the next couple of weeks. Stick with “Days of Our Lives” for updates on Clyde’s probable murder.

So “Days” fans, what do you think about the news that Chad and Stefano will team up to take on Clyde? What about JJ’s desire to bring the ruthless drug lord down? Can Aiden get revenge for Clyde’s assault while settling his debt with Stephano? Who will ultimately get payback? Let us know what you think in the comments below and don’t forget to check CDL often for the latest “Days of Our Lives” spoilers, rumors, updates and news.