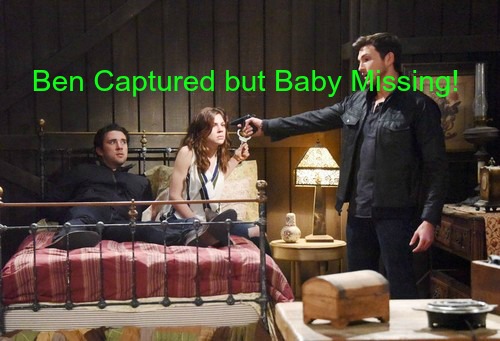 “Days of Our Lives” spoilers tease that Abigail (Kate Mansi) will soon be free from Ben’s (Robert Scott Wilson) evil clutches. Chad (Billy Flynn) will manage to get Abigail out of the burning cabin and the smoke will alert the authorities to their location. Rafe (Galen Gering) put out an APB and it will undoubtedly prove helpful.

Mammoth Falls is a sleepy little town and everyone has been on the lookout for anything suspicious. A cabin with smoke billowing out of it will be spotted in no time.

Once the cops know Abigail is safe, they’ll focus on finding Ben. This ruthless brute has a long string of crimes and he needs to pay for them. Lani (Sal Stowers) and JJ (Casey Moss) will start searching for Ben and he’ll turn up quickly. However, Abigail’s primary concern will be making sure her child is alive and well. We can’t forget that the baby was born early and his health could be at risk.

“Days of Our Lives” spoilers say Abigail will try everything to get Ben to confess where he took her son, but he won’t divulge the whole truth. Ben will admit that he took Colin to a motel, but that’s all Abigail is going to get from her ex-fiancé. Of course, Abby will change the little one’s name now that she doesn’t have to keep Ben placated. You’d think Ben was the baby with all the pacifying that’s been going on in that cabin.

Colin has a nice ring to it, but Abigail will decide to give her son a new and significant moniker instead. After all, Abby wouldn’t want to be reminded of Ben and her horrific experience every time she called for her child.

Abigail will give him a family name that many “Days” viewers will recognize. The baby will be known as Thomas after Abigail’s great-grandfather, Tom Horton (Macdonald Carey). Since Tom was the original patriarch of the show, reviving the name is a fitting tribute for DOOL’s 50th anniversary this year.

All of Thomas’ relatives will want to gush about how adorable he is, but he’ll have to be located first. Fortunately, Chad will remain committed to helping Abigail in any way he can. “Days of Our Lives” spoilers reveal that JJ will join Chad and Abby as they search for Thomas. It sounds like the baby will be back in Salem before long. Stick with the NBC soap for updates on Thomas’ homecoming.

So “Days” fans, what do you think about the news that Ben will be captured and questioned? How will Chad, Abigail and JJ track down the baby? Do you like the fact that the child’s name gives a nod to DOOL history?