Days of Our Lives (DOOL) Spoilers: Ben Kills Will Brutally to Keep Secret Under Wraps – Adrienne Gets Cancer Results 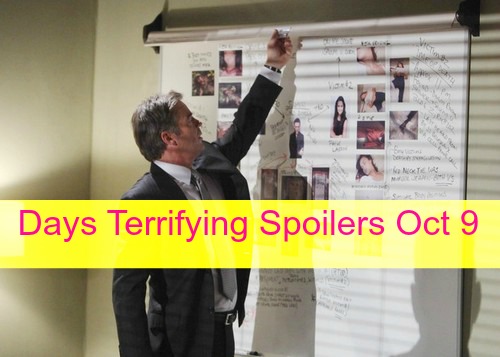 “Days of Our Lives” spoilers for Friday, October 9, tease that Ben (Robert Scott Wilson) is about to take the life of another victim. When Will (Guy Wilson) saw how upset Abigail (Kate Mansi) was by Clyde’s (James Read) arrest, he offered to wait for the cable guy so she could give Ben some support. Unfortunately, a game of wastebasket basketball is about to turn deadly.

As Will leaned over the trash can, he noticed a red tie Ben had shoved at the bottom. Ben suddenly came home and locked eyes with Will, who likely knows his discovery will mean big trouble. In fact, it means he won’t be leaving that apartment alive.

DOOL spoilers reveal that Ben is about to go into serial killer mode. Will can’t compete with someone who has that much rage and determination. Ben will wrap his hands around Will’s throat and shout that he should’ve just stayed away. On some level, Ben will feel guilty for killing his friend and the best man he chose for his upcoming wedding.

However, a hint of guilt isn’t enough to keep Ben from covering his tracks. Now that Will realizes Ben is the murderer, Ben can’t let the truth be exposed. Ben will do the deed and presumably dump the body somewhere. It’s doubtful that Ben would want to leave Will’s corpse in his own apartment. Let’s hope Ben learns his lesson after the wastebasket incident. Sloppiness could force even more innocent people to get hurt.

Meanwhile, Lucas (Bryan Dattilo) will stay by Adrienne’s (Judi Evans) side as she worries about the results of her test. Adrienne fears that she might have the breast cancer gene and it has her on edge. Waiting seems to be the hardest part. “Days of Our Lives” spoilers say Lucas will try to calm Adrienne down and assure her that she’ll get through this.

Whether Adrienne gets good news or bad news, she can count on Lucas to be there for her. If only Justin (Wally Kurth) would do the same. Stick with “Days” to see if Justin will ever take a step back from work to focus on Adrienne’s needs.

Elsewhere, JJ (Casey Moss) and Gabi (Camila Banus) will share a warm moment. JJ recently came to Gabi’s rescue when she ran into a thug down by the docks. Gabi was grateful for JJ’s help and they appeared to hit it off. It looks like their friendship will continue to develop as they bond over something else. Perhaps Gabi will learn that Paige (True O’Brien) was her sister.

JJ could definitely tell Gabi a few stories to help her understand what Paige was really like. Whatever the case, Gabi and JJ will probably be spending quite a bit of time together in the coming weeks. DOOL rumors suggest that a romance could be heating up before long. Stay tuned to “Days of Our Lives” for updates on their potential relationship.

So “Days” fans, what do you think about Ben killing Will? Are you sad that Will and Sonny (Freddie Smith) won’t have the chance to reunite? Will Lucas convince Adrienne that everything’s going to be OK? Will JJ and Gabi establish a connection? Let us know what you think in the comments below and don’t forget to check CDL often for the latest “Days of Our Lives” spoilers, rumors, updates and news.