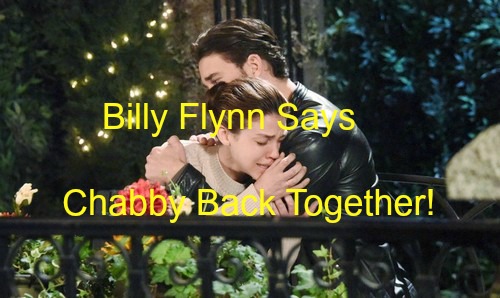 “Days of Our Lives” spoilers reveal that more heartache is on the way for Abigail (Kate Mansi). The poor girl can’t catch a break! Once Ben (Robert Scott Wilson) was hauled off to jail, it looked like Abigail and Chad (Billy Flynn) were finally going to get their shot at happiness. Unfortunately, Andre’s (Thaao Penghlis) evil scheme will interfere with their plans for romance.

“Days” spoilers say Andre will brainwash Chad into dumping Abigail and seducing Belle (Martha Madison). Naturally, the soap world has been in a tizzy about the whole idea.

“Chabby” fans were stunned to hear that their favorite couple is on the brink of a breakup. Luckily, Billy Flynn gave “Days of Our Lives” viewers some good news through a recent tweet.

After being bombarded with angry messages, Flynn teased that this was just a little bump in the road for the star-crossed lovers. In response to one fan’s outrage, Flynn tweeted that “it will pass quickly…” Flynn also included “#chabbyisforever” and “#justgiveitaminute.”

Whew! That’s a relief. It sounds like Chad will soon snap out it and realize he belongs with Abigail. 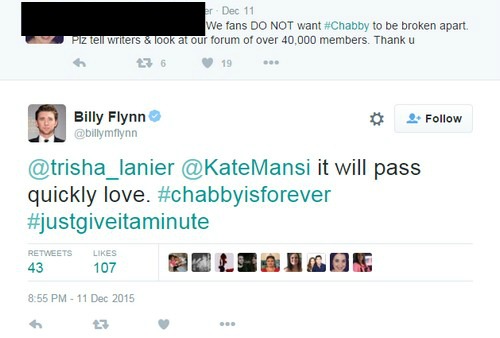 Abby will probably understand when she gets updates on the reason for Chad’s behavior. Almost everyone in Salem knows just how wicked Andre can be. Many viewers are hoping that Chad will come to his senses in time for DOOL’s holiday festivities. Will “Soap Santa” make it happen?

It may be too much to ask, but we’ll put it on our Christmas list anyway.

Of course, it’s important to point out that “Days of Our Lives” tapes nearly six months in advance. If Flynn is saying that “Chabby” is forever, that provides hope for the pairing’s future.

The show has invested a lot in making us believe that Abigail and Chad are meant to be together. It feels like they’re supposed to be the new Sami (Alison Sweeney) and EJ (James Scott).

Soap pairings are always going to have problems, but supercouples manage to beat the odds. They can never stay away from each other for very long. Will Chad and Abigail’s love last all the days of their lives? Stick with DOOL to find out!

So “Days” fans, what do you think about Billy Flynn’s tweet? Are you glad the “Chabby” breakup will be brief? Are Chad and Abigail headed for supercouple status? Voice your opinion in the comments below and don’t forget to check CDL often for the latest “Days of Our Lives” spoilers, updates and news.