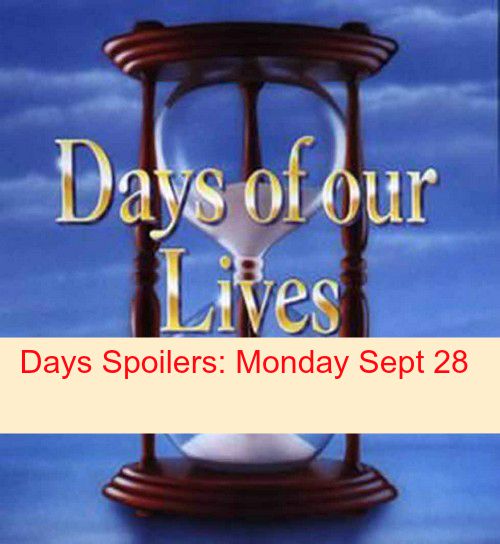 “Days of Our Lives” spoilers for Monday, September 28, tease that Chad (Billy Flynn) will try to figure out his next move. Chad is wanted for Paige (True O’Brien) and Serena’s (Melissa Archer) murders as well as the attempt on Marlena’s (Deidre Hall) life. All Chad can do at the moment is lay low and try to remember more about what happened.

Chad’s memory is still fuzzy, but something might come back to him if he retraces his steps. DOOL spoilers say Chad will soon come up with a disguise to prevent his capture. You can bet that Abigail (Kate Mansi) will be in touch, too. Abby tries to resist the pull, but she just can’t stay away.

Meanwhile, Aiden (Daniel Cosgrove) will have quite a confession to make. “Days” viewers know that Aiden is in a tight spot. Stefano (Joseph Mascolo) appears to be backing out on his end of their current agreement. Aiden was supposed to get a big fat check once he made Hope (Kristian Alfonso) his bride, but he angered Stefano by trying to steal the money sooner.

We don’t know for sure what Aiden will admit to Hope, but it might have something to do with his financial woes. Aiden will probably invent a semi-acceptable excuse for being down on his luck. Hope will likely buy it hook, line and sinker. When it comes to Aiden, Hope is…well, a bit of a sucker. Stick with “Days of Our Lives” to see if Hope’s will ever wise up to her fiancé’s shady motives.

Other DOOL spoilers reveal that Jennifer (Melissa Reeves) and JJ (Casey Moss) will be stunned by what they find. The rumors hint that they may stumble across the bug planted in their home. Of course, Eve (Kassie DePaiva) was the one who hid it, but Jen and JJ would naturally assume it was Clyde (James Read). This might lead JJ to ramp up his efforts to bring Clyde down. However, Jennifer is growing increasingly worried about the threat Clyde poses. Can JJ and Jennifer keep their cool under pressure? Stay tuned to “Days of Our Lives” for updates on the danger they’ll face.

So “Days” fans, what do you think about the news that Chad plans on retracing his steps? What will Aiden confess to Hope? Will Jennifer and JJ find the bug? How will they proceed from here? Let us know what you think in the comments below and don’t forget to check CDL often for the latest “Days of Our Lives” spoilers, rumors, updates and news.