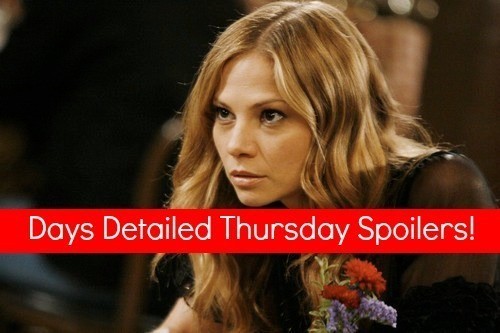 “Days of Our Lives” (DOOL) spoilers for Thursday, December 17, tease that Kayla (Mary Beth Evans) will have a startling encounter. Ava (Tamara Braun) has been lurking in Salem, but now it’s time to make her presence known.

Kayla will be stunned when Ava finally shows her face, but her shock will quickly shift to rage. Ava caused plenty of trouble for Steve (Stephen Nichols) and Kayla several years ago. Kayla is certainly not on board for any more of Ava’s antics.

DOOL spoilers say Kayla will tell Ava to get out of town and leave them alone. However, Ava will give Kayla some news that could prompt her to reconsider. Ava has been practicing her cough and putting on makeup to make herself look sick.

Perhaps Ava will indicate that she’s ill and is hoping to right her wrongs before she fades away. In reality, Ava probably wants to get Kayla’s guard down so she can wreak havoc. “Days” viewers won’t want to miss this intense faceoff.

Meanwhile, Andre (Thaao Penghlis) will have an equally ruthless scheme he needs to carry out. Now that Andre has drugged Marlena (Deidre Hall), he’s free to conduct Chad’s (Billy Flynn) hypnosis session in a devious manner. “Days of Our Lives” spoilers reveal that Andre will instruct Chad to make Belle (Martha Madison) fall for him.

If Chad manages to seduce Belle, he’ll have to get the scoop on the DiMeras’ missing money. Chad will be completely under Andre’s control, which means his relationship with Abigail (Kate Mansi) will be tossed aside. The breakup won’t last long, but confusion and chaos are undoubtedly in Abby’s future.

Elsewhere, Eduardo (A Martinez) will decide to give John (Drake Hogestyn) updates on his deadly mission. DOOL spoilers say John will be alarmed by Eduardo’s orders to kill him. Nevertheless, Eduardo will try to be upfront about the situation and offer a potential solution.

Based on spoilers for next week, it looks like John won’t be entirely confident that things will go as planned. John will soon warn Marlena of the extreme danger he’s facing. Stick with “Days of Our Lives” to see if John can keep himself out of harm’s way.

So “Days” fans, what do you think about Kayla and Ava’s encounter? Will Ava come up with a good tale to gain sympathy? Will Chad eventually make Andre pay for his plot? Will John be able to avoid the peril?