‘Days of Our Lives’ Spoilers: Abigail Finds Out She’s Pregnant, Is Baby Daddy Chad or Ben? 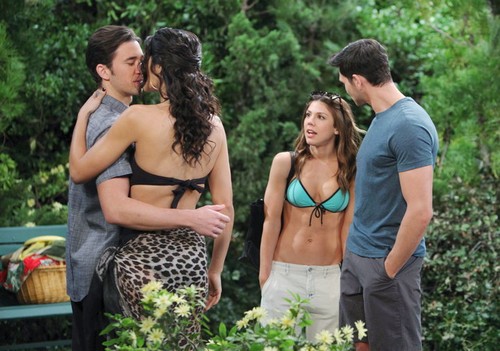 “Days of Our Lives” spoilers tease that Abigail (Kate Mansi) is about to find herself facing a familiar dilemma. Abigail will be stunned when she finds out she might be pregnant. Abigail already had a terrifying pregnancy scare after her fling with EJ (James Scott). Fortunately, it turned out to be a false alarm, but DOOL rumors say this time it could be the real deal. A casting call went out for twin preemies to share the role of one Salemite’s son or daughter. It’s starting to look like Abigail could be the next character to become a new mom.

It’s worth mentioning that Kate Mansi recently posted a few pics of Abigail’s dull, loose-fitting outfits on Instagram. Several “Days of Our Lives” viewers commented on the odd style Abigail seems to be leaning toward. When one poster called the wardrobe “horrendous,” Kate Mansi dropped a subtle hint of what’s going on. Mansi replied, “Just wait…it will all make sense soon.” Perhaps Abigail is supposed to appear as if she’s hiding a baby bump. Plus, Mansi has been singing the praises of the storyline she’s currently filming on her Twitter account. There’s bound to be something big in the works.

If Abigail really is pregnant, then let the “baby daddy” guessing game begin. Between Chad (Billy Flynn) and Ben (Robert Scott Wilson), Abigail has done her fair share of bed-hopping lately. So who’s it going to be? First, we have the conflicted Chad, whose father is already far too interested in him getting together with Abigail. Stefano (Joseph Mascolo) would undoubtedly cheer at the idea of adding to the DiMera clan. In fact, Stefano would probably find a way to fake the paternity test if need be. That’s definitely something to watch out for later on “Days.”

Of course, DOOL viewers know that Ben is already struggling to accept Abigail’s cheating. Knowing Abigail is pregnant with Chad’s child might push Ben over the edge. On the other hand, Ben would likely be over the moon if he thought the baby was his. Sure, Ben would be stunned at the prospect of becoming a new father, but he’d undoubtedly be ecstatic once the shock wore off. A child with Abigail would help Ben feel like he finally got the girl. Still, chances are good any baby Abigail pops out will be a DiMera. We’re going to need some heirs to carry on the family legacy. Stick with “Days of Our Lives” for updates on the possible baby drama.

So “Days” fans, what do you think about the news that Abigail will discover she could be pregnant? If she is, who would you want the father to be? Would this storyline be more interesting with Ben or Chad as the “baby daddy”? Let us know what you think in the comments below and don’t forget to check CDL tomorrow for the latest “Days of Our Lives” spoilers, rumors, updates and news.