‘Days of Our Lives’ Spoilers: Baby Drama, Love Triangles and Dramatic Returns on the Way for May Sweeps

BY Heather Hughes on May 1, 2015 | Comments: 2 comments
Related : Days of Our Lives, Soap Opera, Spoiler, Television 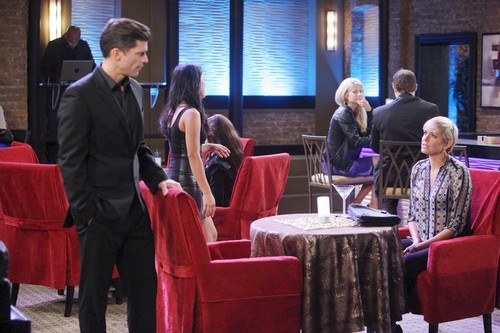 “Days of Our Lives” spoilers tease that DOOL fans can expect plenty of chills and thrills as May sweeps gets under way. Theresa (Jen Lilley) will finally bring her baby home, but she’ll struggle to adapt to motherhood. Fortunately, Theresa’s mom, Kim (Patsy Pease), will visit Salem to help her adjust. Both Theresa and Kim will urge Brady (Eric Martsolf) to be more hands-on when it comes to caring for his son. It seems Theresa will try to use the baby as a way to come between Brady and Melanie (Molly Burnett). Since Molly Burnett’s on-air departure is coming up near the end of this month, it looks like Theresa may succeed.

Meanwhile, Will (Guy Wilson) will find himself in hot water over yet another article. When Clyde (James Read) learns that his life is part of Will’s writing assignment, he’ll make it clear that Will should find a new subject. Of course, Will is sure to be worried about more than just work. As Paul (Christopher Sean) returns to Salem, Will and Sonny (Freddie Smith) will once again face strife in their marriage. Stay tuned to “Days of Our Lives” to see if a “WilSon” divorce is inevitable.

Other “Days of Our Lives” spoilers for May sweeps hint that Stefano (Joseph Mascolo) will be out for vengeance. Marlena (Deidre Hall) and Victor (John Aniston) could both pay a price for their involvement in bringing down Kristen (Eileen Davidson). The rumors say that Kristen may even die as a result of their actions and that certainly won’t sit well with Stefano. As “Days” viewers know, Stefano doesn’t take kindly to anyone messing with a DiMera.

Hope (Kristian Alfonso) and Aiden (Daniel Cosgrove) have been the only happy couple on “Days” lately. Unfortunately, that could change in the near future. Aiden and Hope will find themselves at odds over Clyde and his shady behavior. Let’s hope “Haiden” can weather the storm. Since Bo (Peter Reckell) will return for DOOL’s 50th anniversary later this year, Aiden will have to give it everything he’s got if he wants to hang on to Hope.

Next, Eve (Kassie DePaiva) will shock JJ (Casey Moss) with a major admission. Could Eve confess that she has feelings for JJ? Some rumors are swirling that Eve has been hiding a pregnancy that resulted from their last encounter. Other rumors say that Paige (True O’Brien) is the one with a baby on the way. We don’t know for sure where this storyline is going, but it sounds like Paige will soon get big news.

Daniel (Shawn Christian) and Nicole (Arianne Zucker) are headed for another breakup and this time it might be for good. Nicole will find herself intrigued by the charming and suspicious Xander (Paul Telfer), but it seems Eric (Greg Vaughan) will be top man on her mind. When Nicole gets updates on Serena’s (Melissa Archer) lies, she’ll be on a mission to expose the truth and help Eric see Serena for who she really is.

Finally, two love triangles will be heating up the NBC soap. Justin (Wally Kurth) will return from his business trip and attempt to make sense of his marriage to Adrienne (Judi Evans). That means poor Lucas (Bryan Dattilo) could lose his new love. At least Lucas will be busy sorting out a new job offer and going up against Kate (Lauren Koslow). Another love triangle will be placed front and center as Abigail (Kate Mansi) finds herself torn between Ben (Robert Scott Wilson) and Chad (Billy Flynn). Stick with “Days of Our Lives” to see all the drama this May.

So “Days” fans, what do you think about all the exciting storylines going on during May sweeps? Are you happy with the direction DOOL is heading in? What story are you most interested in right now? Let us know what you think in the comments below and don’t forget to check CDL tomorrow for the latest “Days of Our Lives” spoilers, rumors, updates and news.