‘Days of Our Lives’ Spoilers: Daniel and Nicole Clash Over Secrets – Serena Slips Up – Brady and Marlena Learn Kristen’s Fate 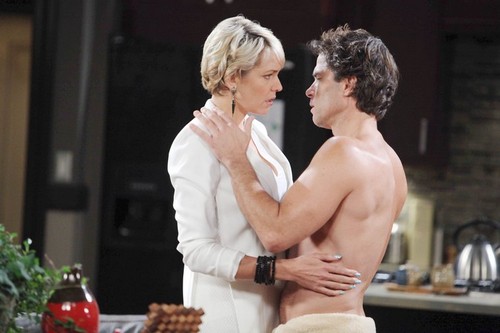 “Days of Our Lives” spoilers for Thursday, April 30, tease that Daniel (Shawn Christian) and Nicole (Arianne Zucker) will have a major confrontation. It’s no surprise that Nicole’s secrets will once again put them at odds. Nicole wants to be honest, but she knows that Daniel is paranoid about her feelings for Eric (Greg Vaughan). Dr. Dan may learn that Nicole is still suspicious of Serena (Melissa Archer). It looks like Nicole will have to get ready for another round of criticism. However, this fight might be the last straw for both of them. The rumors hint that Nicole will make some updates to her love life in the near future. Stick with “Days of Our Lives” to see if Nicole will ditch Daniel for good.

Meanwhile, Serena will blunder in a big way. Serena has made a lot of mistakes in her scheme, but she’s usually able to smooth things over. Unfortunately, it seems Serena’s lucky streak is about to end. They’ll probably drag out the reveal a little longer, but it’s clear that Serena’s days in Salem are numbered. Melissa Archer will be wrapping her time on DOOL soon so Serena’s storyline should start winding down. We don’t know for sure how Serena will get caught, but it could have something to do with the spilled diamonds in Daniel’s apartment. “Days” viewers saw that Serena tried to grab all the dropped jewels, but it’s possible that she left a straggler or two in between the couch cushions. Who knows? Maybe Parker (Evan and Luke Kruntchev) will find some and run to show Daddy his “sparkles.”

Other “Days of Our Lives” spoilers hint that Brady (Eric Martsolf) and Marlena (Deidre Hall) will deal with the aftermath of Kristen’s (Eileen Davidson) fall. We still don’t know if Kristen is dead or alive, but there’s trouble coming either way. Even if Kristen is just critically injured, Stefano (Joseph Mascolo) will make it his new mission to make Marlena pay. Since DOOL spoilers indicate that Chad (Billy Flynn) will get some tough news on Friday, all the signs seem to point to a dead or at least comatose Kristen. Stay tuned to watch the cops get to the bottom of things.

So “Days” fans, what do you think about Daniel and Nicole’s fight? Are they really over this time? What about Serena’s slip? Will it put someone on the path to the truth? Will Kristen survive or will the police arrive to find a dead body? Let us know what you think in the comments below and don’t forget to check CDL tomorrow for the latest “Days of Our Lives” spoilers, rumors, updates and news.