BY Amanda Austin on May 4, 2015 | Comments: 8 comments
Related : Days of Our Lives, Soap Opera, Spoiler, Television 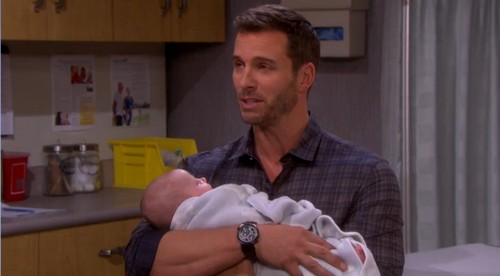 “Days of Our Lives” spoilers for the week of May 4-8 reveal that DOOL fans can expect to see some major drama and exciting revelations unfold on the NBC soap. According to “Days” rumors you will not want to miss a single episode! There’s never a dull day in Salem; however, the upcoming week will be extremely eventful for some new couples and old couples. According to “Days of Our Lives” spoilers, this is what fans can expect to see during the week of May 4.

Monday, May 4: “Days of Our Lives” spoilers for Monday’s episode of the NBC soap reveal that Chad DiMera (Billy Flynn) and Abigail Deveraux’s (Kate Mansi) reconciliation gets put on hold – Abigail is noticeably upset when her ex-boyfriend pushes her away and tries to put some distance between them, which sends her some mixed signals seeing as how just last week he was trying to get back together with her.

Tuesday, May 5: Spoilers for the episode of “Days of Our Lives” airing on Tuesday May 5 tease some a major relationship milestone for Adrienne (Judy Evans) and Lucas (Bryan Dattilo), but they have no idea that her husband Justin is back in Salem and his return can put a major damper on the sparks that are flying between them. Also, DOOL spoilers reveal that Nicole (Arianne Zucker) continues to investigate Serena (Melissa Archer), and Hope (Kristian Alfonso) and Rafe (Galen Gering) have a heart to heart about her complicated relationship with Aiden (Daniel Cosgrove).

Wednesday, May 6: On Wednesday’s episode of the NBC soap DOOL fans will get to see Will (Guy Wilson) once again in some hot water regarding his journalism career. Spoilers reveal that Clyde threatens him and forces him to write a controversial article. Meanwhile across town Adrienne and Justin (Wally Kurth) have a heated confrontation over their son Sonny.

Thursday, May 7: “Days of Our Lives” spoilers for May 7 reveal that sparks will be flying between Nicole and her new love interest, Xander (Paul Telfer). Little does the potential couple know that they are playing each other like a fiddle and they both have their own personal agendas.

Friday, May 8: According to “Days of Our Lives” spoilers in the latest edition of Soap Opera Digest, on Friday, May 8, Nicole will “throw Daniel for a loop.” Meanwhile, across town, Melanie Jonas (Molly Burnett) is having a hard time adjusting to the idea of being a step-mom and is concerned about the future of her relationship with Brady (Eric Matsolf) now that he has a baby with Theresa Donovan (Jenn Lilley).

So DOOL fans, are you as excited as we are for a whole new week of drama? Do you think that Brady and Melanie will break up? Is there trouble in paradise for Hope and Aiden? Is Adrienne and Lucas’s relationship doomed now that Justin is back in town? What about Abigail and Chad – will they get back together? Let us know what you think in the comments below and don’t forget to check CDL tomorrow for more “Days of Our Lives” spoilers and news.