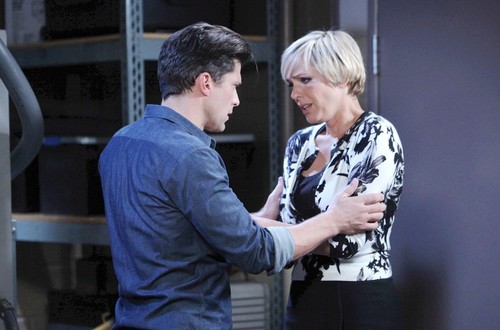 “Days of Our Lives” spoilers for Thursday, June 25, tease that Stefano (Joseph Mascolo) will be up to his old tricks again. DOOL viewers know that Stefano is always scheming and his latest plan will involve Kate (Lauren Koslow). Stefano will dupe Kate into seeing him and listening to what he has to say. There’s a good chance that Stefano’s meeting has something to do with Clyde (James Read). We don’t know for sure what Stefano has in store, but Clyde will find out soon enough. “Days” rumors hint that things are going to get pretty ugly between these two down the road.

Meanwhile, John (Drake Hogestyn) and Marlena (Deidre Hall) will unite in the face of adversity. It looks like Eric’s (Greg Vaughan) near-death experience could help bring them closer together. Perhaps the thought of losing someone they love will make them realize they need to take hold of what’s right in front of them. Marlena and John have been at odds over the last couple of months, but the tension is slowly starting to lift. “Days of Our Lives” spoilers say coping with Eric’s predicament could mark a turning point in John and Marlena’s relationship.

Meanwhile, Nicole (Arianne Zucker) and Eric will also reach a crossroads. As Nicole hovered in and out of consciousness, she began having flashbacks of warm moments with her two loves. Daniel (Shawn Christian) was there for Nicole when she woke up and she insisted that he’s always been the man for her. Of course, Nicole was singing a different tune when she was trapped with Eric in the basement of the news station. Eric remembers how they declared their love for each other and he’ll stop by Nicole’s hospital room to talk about it.

DOOL spoilers indicate that Eric and Nicole will agree to keep what happened between them a secret. That’s probably not the best idea considering how much Daniel hates it when Nicole withholds information. However, this is one secret that Nicole simply can’t confess. If Nicole reveals she still has feelings for Eric, her relationship with Daniel will be doomed. Nicole just isn’t willing to give Daniel up—yet. Stick with “Days of Our Lives” to find out how long it’ll take for Daniel to get updates on the painful truth.

So “Days” fans, what do you think about Stefano’s trickery? What does Stefano want from Kate? Are John and Marlena on the right track now? What about Eric and Nicole? Will they be able to fight their deep love for each other? Let us know what you think in the comments below and don’t forget to check CDL tomorrow for the latest “Days of Our Lives” spoilers, rumors, updates and news.