Days of Our Lives Spoilers: Hope Learns The Truth About Aiden’s Wife – Blame Cole as Eve and JJ’s Affair Exposed 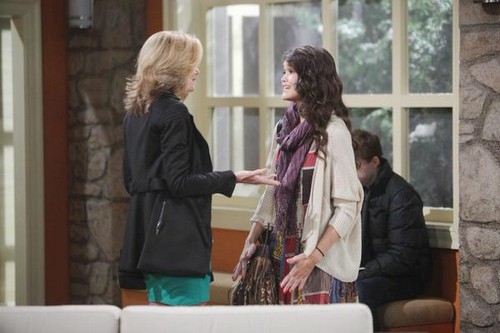 “Days of Our Lives” spoilers for the week of February 9-13 tease some exciting drama in Salem, and rumor has it DOOL fans will not want to miss a single episode of the NBC soap. Valentine’s Day is right around the corner, which means some major relationship drama for some of our favorite Salemites. According to “Days of Our Lives” spoilers, this is what viewers can expect to see the week of February 9th:

Monday February 9: On Monday’s episode of “Days of Our Lives” Salem Police Department’s own Hope Brady (Kristian Alfonso) finds out some shocking news about her boyfriend Aiden while vacationing with him. Rumors have been floating around for weeks teasing that Aiden (Daniel Cosgrove) killed his wife Meredith – and it looks like the truth will finally come out!

Tuesday February 10: “Days of Our Lives” spoilers for the February 10th episode of the NBC soap reveal that DOOL fans can expect to see Cole stir up some major drama in Salem when he announces to Paige that he knows who JJ cheated on her with. Could the truth finally come out that JJ has been having sex with Paige’s mom Eve Donovan (Kassie DePaiva)?

Wednesday February 11: DOOL spoilers tease that on Wednesday’s episode Victor Kiriakis (John Anniston) learns that he is the reason Sonny was brutally attacked and nearly lost his life. Meanwhile across town Paul Narita (Christopher Sean) has a heart to heart with Sonny’s (Freddie Smith) mom Adrienne and reassures her that he is leaving Salem for good and will not cause any more trouble for his ex-boyfriend and Will Horton.

Thursday February 12: The February 12th episode of “Days of Our Lives” will find Serena Mason (Melissa Archer) scheming to switch the elephant statues, however her plan hits a major speed bump. And, spoilers also tease that JJ’s affair with Eve Donovan begins to unravel when his sister Abigail Deveraux (Kate Mansi) realizes that he hasn’t been sleeping at home.

Friday February 13: According to “Days of Our Lives” spoilers for February 13th, Melanie Jonas (Molly Burnett) can’t let go of her sneaking suspicions about Dr. Mandrake and decides to do some digging in to his past – behind Brady’s back. Rumor has it that Melanie should just let sleeping dogs lie, and she may discover something she has no business discovering.

So DOOL fans, do you think that Aiden killed his wife Meredith? Is Hope in danger? Is this the week that JJ and Eve’s sordid affair is finally exposed? What will Melanie find out about Dr. Mandrake? Will Paul Narita rally leave Salem? Let us know what you think in the comments below and don’t forget to check CDL tomorrow for more “Days of Our Lives” spoilers and news.