‘Days of Our Lives’ Spoilers: Alison Sweeney in Talks to Return to DOOL, Sami Brady Soon Back in Salem? 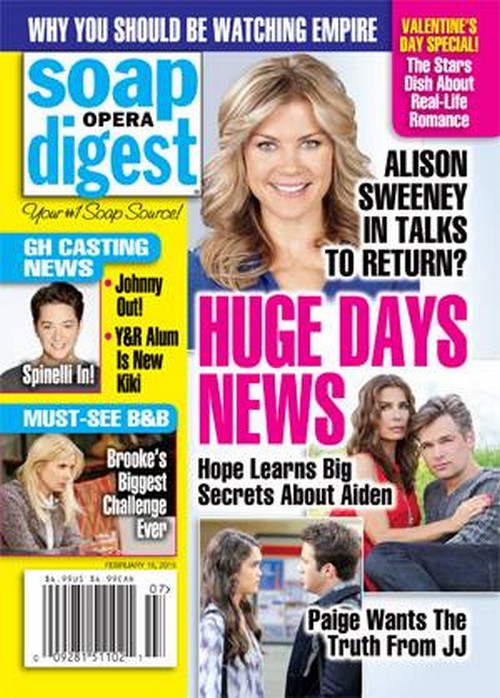 “Days of Our Lives” spoilers reveal that viewers may not have seen the last of Sami Brady. Word has it that Alison Sweeney is in talks to return as the feisty fan favorite. The actress left “Days” after 22 years citing her family as the main reason. Between her role on DOOL and her job hosting “The Biggest Loser,” Sweeney had a lot on her plate. She stated in interviews that she wanted more time at home with her husband and kids. However, it seems she may have just needed a little break.

Sweeney taped her last episodes of “Days of Our Lives” in May of 2014 and her final scenes aired last October. Since then, she’s already been back on set in the director’s chair. She’s also signed a deal to star in the “Chocolate Chip Cookie Murder” movie franchise on the Hallmark channel. Since she seems to be getting back to work, could this mean that she could also bring Sami back to DOOL? According to Soap Opera Digest, she’s at least considering offers. There’s a possibility that Sweeney could return, though it’s uncertain how many episodes per week she would commit to.

It’s safe to say that “Days of Our Lives” writers would be happy to have her back. The NBC soap has been in a rebuilding period with its cast after the departure of Sweeney and James Scott. Sami and EJ had been a core couple in recent years and their absence has definitely been felt. The door was left open for Sweeney to return when Sami left Salem for Hollywood. We’ll have to wait and see if she takes them up on their offer, but anything is possible if the price is right.

So “Days” fans, what do you think about the possibility of Alison Sweeney returning to the show? Would you be glad to have Sami back in Salem? Should they recast EJ and put their power couple front and center once again? Let us know what you think in the comments below and don’t forget to check CDL tomorrow for the latest “Days of Our Lives” spoilers and news.