‘Days of Our Lives’ Spoilers: Kristen and Brady Explosive Showdown Over Baby – Clint Tricks Theresa Into Going to Italy 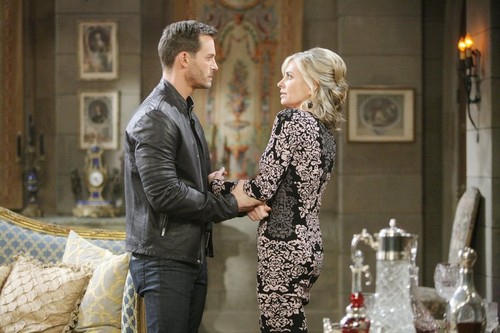 “Days of Our Lives” spoilers reveal that Kristen (Eileen Davidson) and Brady (Eric Martsolf) will have an explosive showdown. Victor (John Aniston) gave Brady updates on Kristen’s whereabouts and he immediately hopped on a plane to confront her about Theresa’s (Jen Lilley) stolen embryo. Kristen had hoped to stay under the radar, but it looks like she’ll have to form a new plan. DOOL spoilers tease that Brady will demand to have baby tested to determine who the real parents are. Of course, Kristen won’t stand by and let little Christopher be taken from her. There was a time when Kristen was obsessed with Brady, but the baby has now taken the top spot in her heart. Kristen will be in full-on mama mode as she fights to keep the child she loves.

“Days” viewers know that Kristen is ruthless when there’s something she wants. The latest DOOL promo video shows Kristen pulling a gun on Brady to stop him from taking Christopher away. It’s clear that Kristen means business and Brady won’t have much room to negotiate if his life is at stake. The rumors say both Brady and Melanie (Molly Burnett) could be in grave danger. Will Brady back off or risk everything to take his child home? Stay tuned to “Days of Our Lives” to see who will win the battle for the baby.

Other “Days of Our Lives” spoilers hint that Clint (Lucas Kerr) will put his sweet-talking skills to good use as he tricks Theresa once again. Theresa has been duped and dumped more times than she can count, but she can’t resist coming back for more. All Clint has to do is turn on the charm and his “baby” falls for it hook, line and sinker. It seems likely that Clint will convince Theresa to come with him on a romantic getaway. Theresa has been dying to get out of Salem so Clint’s timing couldn’t be any better. Unfortunately, we all know Theresa’s trip to Italy won’t exactly be a relaxing vacation. Clint has strict orders to deliver Theresa to Kristen. Shortly after the plane lands, Theresa is in for the surprise of her life. Stick with the NBC soap to find out if Theresa can survive what Kristen has in store.

So “Days” fans, what do you think about the news that Brady will confront Kristen? Would Kristen really be willing to shoot Brady to keep him away from Christopher? What about Clint and Theresa’s trip? Will Theresa freak when she discovers she really does have a child? Let us know what you think in the comments below and don’t forget to check CDL tomorrow for the latest “Days of Our Lives” spoilers, rumors, updates and news.