Days of Our Lives Spoilers: Clint Traps Theresa – Kristen Caught by Brady and Melanie in Italy – Jennifer and Eve Fight 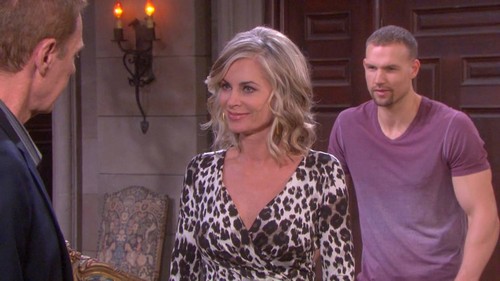 “Days of Our Lives” spoilers tease that April 20-24 will be packed full of exciting Salem drama, and according to DOOL rumors fans of the NBC soap will not want to miss a single episode. The week of April 20 will feature some tense scenes with our favorite villainess Kristen DiMera (Eileen Davidson), and of course some Salemites will face romantic woes. According to “Days of Our Lives” spoilers, this is what fans can expect to see during the week of April 20:

Monday April 20: “Days of Our Lives” spoilers reveal that on Monday’s episode of the ABC soap, Kate Roberts gets exactly what she wants and the fallback is severe. Kate (Lauren Koslow) always manages to get her way, but this time her scheme with Lucas (Bryan Dattilo) blows up in her face.

Tuesday April 21: On the April 21 episode of “Days Of Our Lives,” spoilers tease that Brady arrives in Italy to confront Kristen DiMera – the villainess is shocked when he arrives at her hideaway, and Brady (Eric Martsolf) is shocked when he realizes that Melanie (Molly Burnett) tagged along and stowed herself away in the plane. Meanwhile back in Salem spoilers reveal that Hope (Kristian Alfonso) and Aiden’s (Daniel Cosgrove) romance will hit a major speedbump.

Wednesday April 22: According to spoilers for the NBC soap on Wednesday’s episode Kristen’s henchman Clint continues to do her dirty work back in Salem while she is dealing with Brady in Italy. This week’s edition of Soap Opera Digest reveals that, “Clint lures an unsuspecting Theresa (Jenn Lilley) into a trap.”

Thursday April 23: “Days of Our Lives” spoilers reveal that on Thursday’s episode of the NBC soap Jennifer tries to have a serious conversation with Eve Donovan (Kassie DePaiva) about Paige (True O’Brien) and JJ’s (Casey Moss) relationship. The two meddling mothers just can’t seem to get along, even for the sake of their kids.

Friday April 24: According to DOOL spoilers, on April 24 fans of the NBC soap can expect to see Kristen DiMera make a shocking confession to Brady and Melanie in Italy, and it will change the course of everyone’s lives forever. Does she reveal that she is raising Brady and Theresa’s baby as her own?

So DOOL fans, are you as excited as we are that Kristen DiMera is back on the NBC soap wreaking havoc? DOOL coming and goings recently revealed that Molly Burnett is exiting the soap, could she get killed in Italy? How will Brady react when he learns he has a baby? What is Clint going to do with Theresa? Let us know what you think in the comments below and don’t forget to check CDL tomorrow for more “Days of Our Lives” spoilers and news.