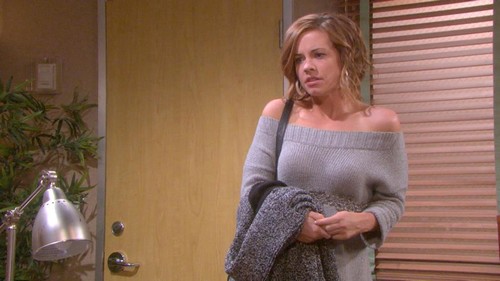 “Days of Our Lives” spoilers hint that as Melanie Jonas (Molly Burnett) wraps up the DOOL mystery of Theresa Donovan’s (Jen Lilley) stolen embryo, she’ll also wrap up her time in Salem. According to Daytime Royalty, Molly Burnett filmed her final episodes in December. Due to DOOL’s taping schedule, Burnett’s last scenes should air around the end of May.

Molly Burnett’s departure doesn’t really come as a surprise. When Burnett returned to “Days of Our Lives” last year, the rumors said it would only be for a six-month stint. The confirmation comes just after the report that Freddie Smith, who plays Sonny, would be moving on. It was also recently confirmed that Melissa Archer, who plays Serena, got the boot. The recent cast trimming comes at a good time for “Days.” With several soap vets returning for the 50th anniversary of “Days of Our Lives,” it will open up a little airtime for the writers to play around with.

As for Melanie, it’s tough to say how she’ll make her exit. There have been rumors that Melanie could get kidnapped, attacked or even killed for figuring out Kristen’s (Eileen Davidson) scheme. Now that Kristen has had a taste of motherhood, there’s no predicting how far she’ll go to protect that baby. On the other hand, if Melanie solves the case and Kristen’s plan collapses, it means Brady (Eric Martsolf) could end up with shared custody of his baby with Theresa.

Since it’s obvious that Theresa still has feelings for Brady, maybe Melanie will step aside to let Brady figure out if he feels the same way. If there’s a chance Brady and Theresa could work things out, Melanie might leave Salem to let them raise their child together. Of course, there’s also the possibility that once Kristen pops back into town, Melanie may decide that she’s better off leading a calmer life back in Europe. Stick with CDL for updates as more details emerge about the end of Melanie’s storyline.

So “Days” fans, what do you think about the news of Molly Burnett’s exit? Will you miss Melanie? Are you bummed about the recent departures or are you happy there’ll be more room for vets as DOOL’s 50th anniversary approaches? Let us know what you think in the comments below and don’t forget to check CDL tomorrow for the latest “Days of Our Lives” spoilers, rumors, updates and news.