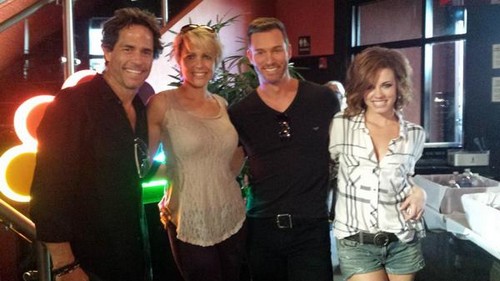 Days of Our Lives spoilers have been teasing Molly Burnett’s return to the NBC soap for months, TPTB at Days finally confirmed that the rumors were true, and Melanie Jonas is headed back to Salem. According to Days of Our Lives comings and goings Melanie’s first air date is scheduled for Friday November 21. For those of you who aren’t familiar with the character of Melanie, she was the daughter of Daniel and starred on DOOL from 2008-2012, after a tumultuous relationship with Chad DiMera she fled to Europe to live with her mother.

Days of Our Lives spoilers have been teasing that when Burnett returns to Salem as Melanie this week she will be harboring a huge secret. The actress recently dished to TV Guide about her DOOL come-back and what exactly that big secret entails. Sadly, Melanie shot down soap rumors that her character will have given birth to a DiMera baby. The Days of Our Lives actress did reveal that when Melanie returns to Salem she will be on the run, and committed a crazy crime in Europe and needs a safe place to hide out from European law officials.

As far as Melanie Jonas’s love life, Burnett dropped some pretty big Days of Our lives spoilers in her TV Guide interview. She claims that Melanie Jonas is totally over Chad DiMera and she sets her sights on someone DOOL fans would last expect. (Ahem, Brady Black.) Burnett also teased that she knows all about Theresa Donovan scamming Brady and putting his father in to a coma, and Theresa better watch out for Melanie!

So Days fans, are you excited for Melanie Jonas’s big comeback? What do you think she did in Europe that has her on the run? Are you one of the thousands of fans that are hoping for a Brady and Melanie love story? Let us know what you think in the comments below and don’t forget to check CDL tomorrow for more Days of Our Lives spoilers and news.