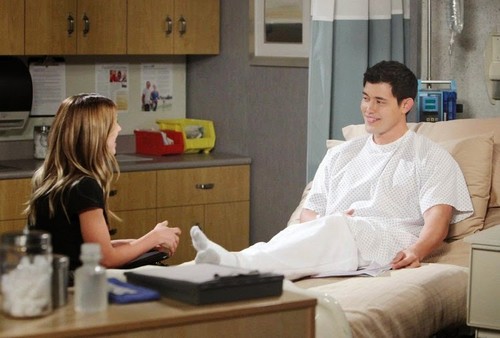 Days of our Lives spoilers were teasing Alison Sweeney’s exit as Sami Brady for months, so when the day came DOOL fans were totally prepared for it, however no one realized she would be taking her son Will Horton with her until the week that she left. Guy Wilson’s October 30th exit came as a bit of a shock to Days fans, but according to Days of Our Lives spoilers he will return to Salem before the month of November is up – and rumor has it he comes back with a slew of new storylines.

Will Horton’s portrayer Guy Wilson recently leaked some pretty exciting Days of Our Lives spoilers in an exclusive interview with Soap Opera Network. Will’s father Lucas Horton has been on the backburner for quite a while, but with two major cast members out of the picture (Alison Sweeney and James Scott), Lucas’s portrayer Bryan Dattilo will finally be getting a chance to shine. According to Guy Wilson’s spoilers, when Will Horton returns he and his father Lucas will be spending a lot of time together and bong as a father and son, Days fans can expect to see Will and Lucas working together to solve a major mystery – unfortunately there is no news yet on what that mystery may be.

And, on other Days of Our Lives news, Wilson teases there will be a huge storyline coming up involving him, his husband Sonny, and Salem newbie Paul Norita, a professional baseball player. Rumors are currently floating around the internet that Paul might actually be gay, and have a crush on Sonny. It would be exciting to have another gay man in Salem to spice up the drama between Sonny and Will, maybe for a change they could actually fight about something other than their careers.

Are you as excited as we are to see Will and Lucas working together, and Bryan Datillo finally getting some screen time? What mystery are they trying to solve? Could Paul possibly be gay, maybe he is living in the closet to protect his career? Let us know what you think in the comments below and don’t forget to check CDL tomorrow for more Days of Our Lives spoilers and news.