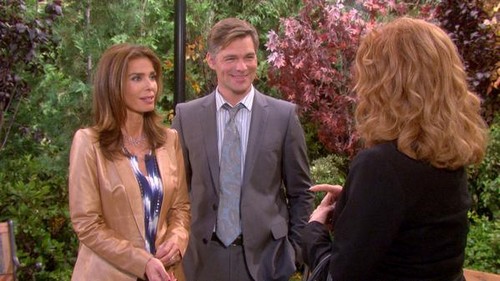 Days of Our Lives spoilers and news reveal that November 17-21 will be another week of must-see drama in Salem, and rumor has it DOOL fans will not want to miss a single episode of the NBC soap. Chad DiMera makes some power moves, new relationships begin, and old relationships come to an end. Here’s what Days of Our Lives fans can expect to see this week.

Monday November 17: Days of Our Lives spoilers tease that on Monday’s episode Chad DiMera begins his quest to take over DiMera Enterprises and he informs Kate that Stefano is about to make a move on her. Chad is clearly playing both sides and pitting Kate and Stefano against each other.

Tuesday November 18: On Tuesday’s episode of Days of Our Lives, DOOL fans can expect to see sparks fly at the Salem hospital when Anne and Abigail have a heated dispute. Abigail was just allowed to return to work, thanks to Chad DiMera, but apparently her co-workers aren’t thrilled about her reinstatement.

Wednesday November 19: Theresa Donovan has been on a mission to win over Brady (Eric Matsolf) for months now, and putting his father in to a coma pretty much killed any chances she had of that. After realizing that her baby miraculously disappeared from her uterus, DOOL spoilers tease that Theresa (Jen Lilley) finally decides to cut her losses and move on, and she has her sights set on Salem newbie Paul.

Thursday November 20: Thursday will be a tough day for Salem residents in the romance department. Days of Our Lives spoilers tease that on November 20th Eve Donovan (Kassie DePaiva) has a heated conversation with her lover/future son-in-law and forces him to break up with Paige. And, Hope and Aiden’s (Daniel Cosgrove) relationship takes a hit when Hope confronts her new lover about his past.

Friday November 21: Days of Our Lives spoilers have been teasing a possible relationship between Daniel and Nicole, and the wheels will be set in motion on Friday’s episode of Days of Our Lives when the two frienemies spend some one on one time together and find themselves in a compromising situation. Also on Friday we see Molly Burnett’s character, Melanie Jonas, return debut – will she wind up as Brady’s love interest? Is Melanie bringing back secrets of her own?

So DOOL fans, what exactly do you think Chad (Billy Flynn) is up to, will he be able to outsmart both Kate and Stefano? Is this the end of JJ and Paige, do you think he and Eve will wind up sleeping together again? Will Paul fall for Theresa’s gold-digging schemes? Do you like Daniel with Nicole, or Jennifer? Let us know what you think in the comments below and don’t forget to check CDL tomorrow for more Days of Our Lives spoilers and news.