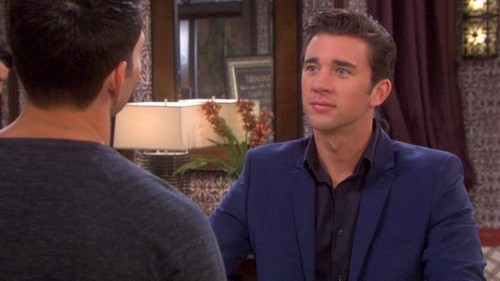 Days of Our Lives spoilers tease that the week of November 17-21 will be full of must-see episodes of the NBC drama. DOOL rumors have been floating around the internet teasing a possible romance between Daniel and Nicole, and according to recent Days of Our Lives spoilers – the writers are definitely going there. During the week of November 17 Daniel and Nicole will spend some time together and sparks will fly between them, by the end of the week the duo finds themselves in an awkward position.

Since Chad DiMera arrived in Salem it has been pretty clear that he is looking out for himself, and no one else, despite deals that he has made with both Kate Roberts and his father Stefano. Days of Our Lives spoilers for the upcoming week tease that Chad makes a major move to take control of DiMera Enterprises and in the process he stabs Stefano in the back (figuratively) and blackmails Kate.

In other Days of Our Lives news, Theresa Donovan has decided that she is finally over Brady and done chasing after/stalking him. The Salem vixen and certified gold-digger sets her sights on newcomer Paul. Meanwhile, Theresa’s big sister Eve does some scheming of her own and forces JJ to break up with Paige… for good this time. DOOL spoilers also tease that during the week of November 17 fans can expect to see Molly Burnett make her big return as Dr. Dan’s daughter Melanie Jonas.

So Days fans, what do you think of Daniel and Nicole getting together? Would you rather see him work things out with Jennifer? How will Kate and Stefano react when Chad completely screws them over? Is this finally the end of Paige and JJ? Let us know what you think in the comments below and don’t forget to check CDL tomorrow for more Days of Our Lives spoilers and news.