Days Of Our Lives Spoilers: Did Lucas Murder Nick – Will Gabi Confess To The Killing – Ej and Sami’s Hit Man Failed!

BY Amanda Austin on May 20, 2014 | Comments: 9 comments
Related : Days of Our Lives, Soap Opera, Spoiler, Television 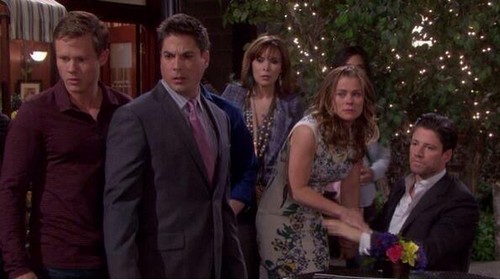 The residents of Salem are still trying to wrap their heads around the latest murder on Days of Our Lives. And, fans at home are just as perplexed when it comes to who killed Nick Fallon. Sure, we’re not exactly mourning his death, but it is driving us insane trying to figure out which DOOL character pulled the trigger. They all seemed to have motive and they all seemed to have access to a gun. However, thanks to DOOL spoilers for the week of May 19th, there is one suspect we can now cross of the list.

EJ and Sami have always been on at the top of the list of suspects when it comes to Nick Fallon’s murder. They both had strong motives, EJ wanted to make sure the photos Nick had of his affair with Abigail never seen the light of day, and Sami was scared Nick was going to take her granddaughter Ariana away from her, and Will and Sonny. EJ called a contract killer and put a hit out on Nick, Sami gave him the green light to do so, and then a day later Nick was dead. Since his death EJ and Sami have both been covering their tracks, and getting their stories straight, making it clear that they thought their hit-man had done his job.

It turns out, one of Nick’s other enemies beat Sami and EJ’s hit-man to the job. The May 26th edition of Soap Opera Digest teases that, “EJ explains [to Abigail] that he contacted a hit man to take out Nick, but at the last moment he didn’t go through with it. EJ also stresses that the assassin received no payment from him.”

So, if EJ and Sami’s hit man didn’t kill Nick Fallon, then who did? DOOL spoilers tease that Lucas will be at the top of Salem PD’s suspect list, but is he really the killer? A popular theory among DOOL fans is that Gabi actually is Nick’s killer. It’s no secret that the actress that plays the part of Gabi, Camila Banus, is leaving DOOL and already filmed her final scene months ago. A trip to prison for murder would certainly be a good way to write out her character. Leave your theories in the comment section below, and don’t forget to check CDL tomorrow for more Days of Our Lives spoilers.