Days Of Our Lives Spoilers: Who Shoots to Murder Nick – Each of Gabi, EJ, Sami, Abigail, Rafe, Will, Sonny Have Motive!

BY Amanda Austin on May 7, 2014 | Comments: 30 comments
Related : Days of Our Lives, Soap Opera, Spoiler, Television 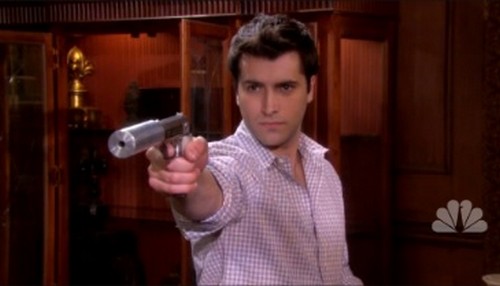 Days of Our Lives fans were completely blind-sighted by the spoilers released a few days ago, which imply that someone in Salem is going to murder Nick Fallon. In the Days of Our Lives spoiler video for the week of May 5th-9th, Nick Fallon stumbles into Horton Square covered in blood, and someone screams “he’s been shot!” The question on every Days fans’ mind is obviously-who did the deed? Well, we put together a list of potential suspects for you, and the real question we should be asking is “who in Salem didn’t want Nick dead?”

EJ has a clear cut motive to want Nick dead, Nick has photographic evidence of EJ and Abigail’s affair and he is threatening to expose them. It has taken Sami and EJ months to finally get to a good place in their relationship, and they are engage to get married. If Nick exposes the affair, EJ will surely lose Sami. Also, it was announced less than 48 hours ago that James Scott (the actor that plays EJ) is leaving Days of Our Lives. What better way to write a character out of a soap opera, than to send them to prison for murder?

Days of Our Lives spoilers for the week leading up to Nick Fallon’s murder tease that Nick and Abigail have a heated conversation, and she learns that he plans to expose her short affair with EJ. The last thing Abby wants is for the world to know about her fling with EJ, especially since she is trying to win over Ben now.

Sami is completely clueless of EJ’s affair with Abby, and the fact that Nick has photos to prove it. She has her own totally unrelated beef with Nick Fallon. Gabi is going to court and for custody of Arianna, and appears to be completely cutting Will, Sonny, and Grandma Sami out of Arianna’s life for good. Sami knows that Nick is the driving force behind Gabi, and therefore blames him for potentially losing her granddaughter. Killing Nick would definitely stop Gabi from going through with filing for custody.

It has become obvious to everyone in Salem that Gabi has fallen back under Nick Fallon’s spell, and is completely smitten with the psychopath again. Rafe already took Nick aside and threatened him to stay away from his little sister, Nick clearly didn’t take Rafe’s orders into consideration. Rafe is an ex FBI agent and bodyguard, he definitely owns a gun and knows how to use it.

We can’t count Will and Sonny out just because they’re so cute and sweet, they definitely have a good reason to want to take out Nick Fallon. They care about Gabi and Arianna, and they have all lived together for quite a while and grown close, they are like a bizarre little family. And, Nick Fallon is trying to take away Will and Sonny’s little family. Also, Days of Our Lives spoilers for the week leading up to Nick getting shot tease that Will and Nick’s argument takes a “violent turn” and Sonny takes “shocking measures” to protect his family.

So Days of Our Lives fans, who do you think finally pulled the trigger and gave Nick Fallon what he has had coming? Could it be Sami, EJ, Abigail, Rafe, Will, Sonny, or someone that we didn’t even include on our list? Will you be sad to see Nick Fallon go, or will you be celebrating his demise like the residents of Salem most likely are? Let us know in the comments below, and don’t forget to check CDL tomorrow for more Days of Our Lives spoilers!

Fans at Soap Opera Spy had another couple of suggestion for who might have shot Nick and wanted him killed:

or Gabby. Isn’t she leaving as well?

I’m going to guess Sami a good way to write her off, but what do I know LOL

Update: Well it’s entirely possible that more than one disgruntled Salemite willing to try to eliminate Nick – this could be a multi-person assassination attempt! By today, April 7, we have learned that EJ hired a hitman and Sami has approved the irrevocable assassination. Sonny went to get something in a locked box, likely a gun. Abigail hates her cousin Nick like poison as he’s threatened to tell Salem that she is ‘EJ Dimera’s whore,’ and Will punched Nick in the park. Gabi let slide that she doesn’t love Nick but is merely placating him so he will keep his mouth shut and not endanger her custody of her child.  Rafe is totally furious at what Nick is putting his sister through. There are many people who would benefit from Nick Fallon dying – lots of motive in Salem!