BY Amanda Austin on May 4, 2014 | Comments: 25 comments
Related : Days of Our Lives, Soap Opera, Spoiler, Television 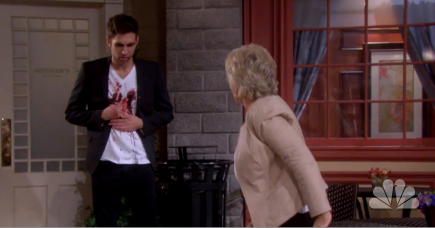 Days of Our Lives spoilers for the week of May 5-9 are here, and Days fans are in for a shock! DOOL spoilers teased us there would be a murder in Salem during the month of May, and we all assumed that Liam’s death was the murder they were referring to. It turns out, Liam actually fell on a tree branch and took his own life. The shooting victim that the Days of Our Lives spoilers were teasing for the month of May actually were referring to the character we all love to hate, Nick Fallon.

In the Days of Our Lives spoiler video for the week of May 5th, Nick Fallon stumbles into Horton Square covered in blood, someone screams out “He’s been shot!” The obvious question on everyone’s mind – who shot him? The list of suspects with a motive is endless, is there anyone in Salem that doesn’t want to see Nick Fallon dead?

Will, Sonny, and Sami were all furious with Nick because he was trying to convince Gabi to take Arianna away from them. We can’t count Rafe out either, he has already had one altercation with Nick over his little sister Gabi. EJ and Abigail have just as much motive, if not more, to want Nick Fallon dead – he has proof of their affair and he would love nothing more than to expose them. Perhaps the shooter will be someone we least expect, like Gabi. Maybe she came to her senses and realized how dangerous and manipulative Nick Fallon really is?

Days of Our Lives spoilers for the week of May 5th-9th also tease that Sami will begin to question her relationship with EJ. And we know why here at CDL – it’s a storyline that is required because… Elvis “EJ” Aron DiMera played by James Scott has left the show! After 8 years today (May 2) was his last day filming but his scenes will run to fall 2104. Apparently the split with DOOL was amicable – and James is pursuing other projects and taking a break – everyone wishes him luck over at Days.

Jordan grows tired of Kate’s meddling and announces she is leaving Salem for good. Meanwhile, Daniel makes a shocking discovery that could have some seriously negative effects on his relationship with Jennifer.

So, Days fans who do you think shot Nick Fallon? Do you think he had it coming, or was his character starting to grow on you? The real question – do you think Nick will survive the shooting or will there be another Salem casualty? Share your thoughts and theories in the comment section below, and don’t forget to check CDL tomorrow for more Days of Our Lives spoilers.

People are curious about what Daniel discovers that is so important on Soap Opera Spy:

One thing we can be certain of is that it isn’t anything nice!