Days Of Our Lives Spoilers Week of May 19: Nicole Hides the Truth From Eric – Kate Accuses Lucas of Killing Nick

BY Amanda Austin on May 16, 2014 | Comments: 7 comments
Related : Days of Our Lives, Soap Opera, Spoiler, Television 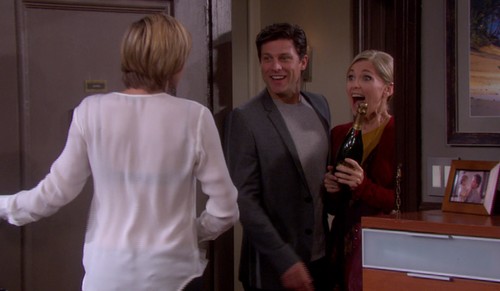 There is currently an intense murder investigation developing on NBC’s daytime soap opera Days of Our Lives. Right now it is anyone’s guess who pulled the trigger and shot Nick Fallon to death. Days of Our Lives spoilers for the week of May 19-23 tease some shocking revelations in the ongoing murder investigation, and the town of Salem isn’t going to know what hit them.

Days of Our Lives spoilers for the week of May 19 tease that Lucas will be the number one suspect in Nick’s murder investigation. Not only will he have Hope and Salem PD breathing down his neck, his Mom Kate discovers that her gun is missing and she calls Lucas out and accuses him of doing the deed herself. DOOL fans have been speculating for a week now which Salem resident pulled the trigger, and according to Days of Our Lives spoilers, it will be revealed that EJ and Sami’s hit-man didn’t kill Nick, so we can cross him off of our list of suspects.

Just because Sami and EJ’s hit-man didn’t get to Nick Fallon first, doesn’t mean that their troubles are behind them. According to DOOL spoilers, Sami is furious when she learns that her brother Eric is planning to wed Nicole, it’s safe to say she doesn’t approve of their relationship. Little does Sami know there is much more than meets the eye to Nicole and Eric’s relationship, and Nicole is currently coming up with a drastic plan to ensure he never learns that she destroyed the evidence in Dr. Chyka’s office that could have cleared his name.

Meanwhile EJ will have his hands full when he learns that Kate and Stefano are spending a lot of time together again. Days of Our Lives spoilers for the week of May 19th-23rd also tease that John will attempt to separate his troubled son Brady from “Bad Girl” Theresa, (whose sister Eve Donovan will be joining DOOL soon enough) and winds up just pushing them closer together.

So, Days fans, with Lucas in the hot seat and EJ’s hit-man apparently innocent, who do you think killed Nick Fallon? Do you think Nicole will come clean to Eric, could this be the end of their recently rekindled relationship? Let us know what you think in the comments below and don’t forget to check CDL tomorrow for more DOOL spoilers.