Days Of Our Lives Spoilers: Is Gabi a Murderer – Did Lucas Steal Kate’s Gun and Then Kill Nick?

BY Amanda Austin on May 13, 2014 | Comments: 5 comments
Related : Days of Our Lives, Soap Opera, Television 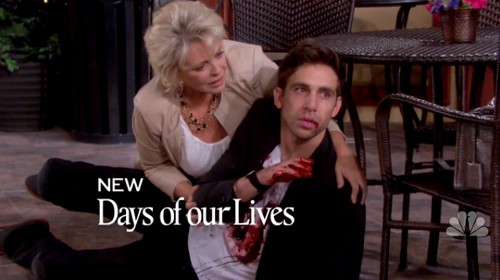 Today, May 12, on Days of Our Lives, the thorn in Salem’s side, Nick Fallon, has his time of death officially called. And, unlike his last death – there is no coming back from this one. Days fans weren’t exactly shocked that Nick didn’t survive the shooting, spoilers have teased that he would be murdered for a few weeks now. His murder is shaping up to be an epic case of “Whodunnit” though.

According to Days of Our Lives spoilers, Hope, Rafe, and the rest of the Salem Police Department will kick off a thorough investigation this week, and try to get to the bottom of who pulled the trigger. They surely have their work cut out for them though, it appears everyone in Salem had a motive and considering the timeline Hope worked out – anyone in Horton Square would have had time to shoot Nick and beat him to the Square.

Kate Roberts was ecstatic when Nick was pronounced dead, she even mentioned celebrating the momentous occasion. Sure, we were all thinking it, but she really had the nerve to say it out loud. Days of Our Lives spoilers tease that Kate’s joy will quickly subside when she realizes that her gun is missing, and it dawns on her that a member of her family could have killed Nick, and could be in some serious trouble.

Sure, EJ DiMera and Sami hired a hit-man to take Nick out, but it hasn’t been confirmed that their murderer for hire is actually the one who did the deed. Meanwhile, we learned today that Sonny and Will have a gun in a bag in their closet (which could very well be Kate’s – although Sonny did take a gun from Stefano DiMera’s house) and that Lucas also met up with Nick at the park moments before he was killed. There is a good chance that he swiped his Mom’s gun before he headed to the park.

Hopefully the murder investigation won’t be dragged out for months, and we will know sooner rather than later who killed Nick Fallon. As of right now who do you think pulled the trigger? Do you think that Ej and Sami’s hit-man got the job done, or did Will, Sonny, or Lucas steal Kate’s gun and beat him to it? Share your thoughts and theories in the comments section below and don’t forget to check CDL tomorrow for more Days of Our Lives spoilers.

It seems that fans over at Soap Opera Spy are leaning towards Gabi and Ben as more likely to be guilty of Nick’s murder:

Gabi. She is leaving. Thought she didn’t have a brain. He could tell her what to do.

Me too they had me fooled I thought she was totally conned by him.

I have always liked Nick but I always feel sorry for the bad ones lol. I think he probably had mental health issues. I really hope Lucas did not do it..don’t think it could be Jordan’s brother cause Petey from AMC is going to be playing him soon…the logical thing would be Gabi and she will go to a “rest home”. But they will try to pin it on Sonny I think!!

Gabi, Will,and Sonny’s finger prints are all on that gun,maybe Victors also…but I think Gabi did it and has a breakdown,,,,maybe Jordan’s brother….now it gets to the fun part.

What do you think? Who killed Nick – and I still claim it could be a conspiracy of more than one Salemite.