Days Of Our Lives Spoilers: Nick Fallon Shot – Speculation Begins On Who Murdered Him – One or More Shooters?

BY Amanda Austin on May 11, 2014 | Comments: 11 comments
Related : Days of Our Lives, Soap Opera, Spoiler, Television 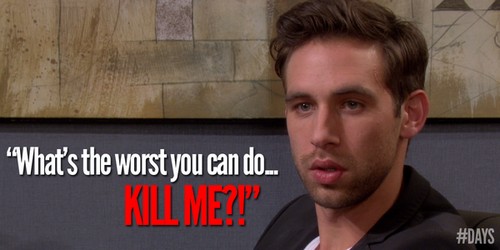 This week is rapidly winding down, and Days of Our Lives spoilers have teased that by Friday May 9th, someone will have shot and killed the man we all love to hate, Nick Fallon. We have already seen the spoiler video where Nick stumbles in to Horton Square covered in blood and it has already been revealed that his character Blake Berris is leaving the show, what we don’t know is which Salem resident gets the honor of pulling the trigger.

EJ DiMera seems like the most logical assailant, he has already compiled a bag of money and contacted a murderer for hire. Sami even gave him the go-ahead. They both have their own separate motives, Nick has possession of photos of EJ having an affair with Abigail and is threatening to show them to Sami, and Nick is threatening to whisk Gabi off and ensure Sami never gets to see her granddaughter Arianna.

EJ and Sami are just a couple of the contenders though. Will and Sonny are both furious with Nick for blatantly trying to take their daughter Arianna away from them, and Will even went as far as to punch Nick in the park, showing us a much angrier and more violent side of him than we are used to. It looks like Will is planning to go to any lengths necessary to keep his daughter Arianna, does that mean he would even kill Nick?

We were all about to give up on Gabi and write her off as possibly the dumbest character to ever appear on Day of Our Lives, however she finally revealed that she isn’t as brainwashed by Nick as we all suspected. She revealed that she sees right through his manipulations, but is going along with him because she is concerned about what he may do if she doesn’t. Gabi may shock all of us and shoot and kill nick so she can be rid of the psychopath for once and for all. We still can’t rule Gabi’s brother Rafe out either, he’s a retired FBI agent and there is nothing he would enjoy nothing more than taking out Nick Fallon and releasing his claws from his little sister.

In less than 48 hours we will know who Nick Fallon’s shooter is, so get your theories in while you can. What do you think DOOL fans? Is it EJ, Gabi, Will, Rafe, or another resident of Salem that finally rids us of Nick Fallon for once and for all? Share your theories in the comment section below, and don’t forget to check CDL later for more Day of Our Lives spoilers.

Everyone on Soap Opera Spy is sorry to see Nick (Blake Berris) go:

i don’t know who shoots him but blake berris is so awesome at his craft of acting i just hate to see him leaves dool………….

Was it his decision to leave, or did they fire him? Either way, a big loss to DAYS, Blake Berris is one of the better younger actors out there

Now will come weeks if not months of Day’s drama as the ‘who killed Nick Fallon’ storyline plays out. In the meanwhile speculation has begun and here are some of the opinions so far:

James Scott is also leaving the show, so E.J.’s hitman could do the deed.

Just watched Days of Our Lives from today was Nick’s death scene the campiest you ever saw? The bloodied hand lifting towards the suspects – all of them LOL.

I wanted him gone so bad BUT when he called marlena seeking help I felt so guilty and decided maybe he shoud get another chance?

We don’t know for sure if he’s dead, but EJ is also leaving the show.

Since we know Blake Berris is leaving the show and so there is a good chance Nick will die of his wounds. As far as attributing responsibility for the shooting and potential murder we know the writers of B&B will not make our job as fans easy! Since there were several gunshots we can’t be sure yet that there is only a single shooter, right?