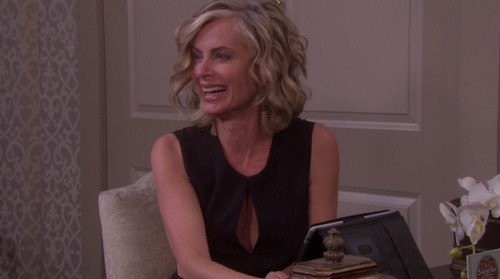 Days of Our Lives spoilers reveal that Eileen Davidson is already back on the set of the NBC soap filming new scenes as Kristen DiMera. Access Hollywood posted an exclusive photo of Davidson back on the DOOL set, standing in the DiMera Family mansion, and is reporting that Monday November 17 is the soap and Real Housewives of Beverly Hills actress first day of filming her next story arc.

Days of Our Lives rumors have been floating around the internet teasing Davidson’s return – but no one expected her to return this soon. Keep in mind though, DOOL is the only remaining soap on the air that films six months in advance, if today is Davidson’s first day back on set, then her actual returning air date won’t be until May 15th 2015. After several months of spicing up the drama in Salem, Kristen just exited the soap at the beginning of November. And, in true Kristen DiMera fashion – she exited with a bang, and stole Theresa Donovan’s unborn child from her uterus and had it implanted in herself.

So, will Kristen DiMera be pregnant with Brady Black’s baby when she returns to Salem? Well, most likely yes, or she may have already even given birth to the child. There is a slight chance the operation was unsuccessful and Kristen could have lost the baby, but what would the fun be in that? Why would the writers waste a good dramatic baby storyline by having Kristen lose the baby? Also before Kristen DiMera’s exit, she paid her brother EJ DiMera a visit in the morgue and injected something mysterious in to his lifeless body with a syringe – perhaps when she returns she can enlighten us on what exactly it was?

What do you think Days of Our Lives fans? Are you excited that Eileen Davidson is actually returning, and so soon? Will she be pregnant with Brady’s baby, how will Brady react? What did she inject in to EJ in the morgue? Let us know what you think in the comments below and don’t forget to check CDL tomorrow for more Days of Our Lives spoilers and news.

Some enthusiasm from the fans at Soap Opera Spy Soap for the great Eileen Davidson:

Cant wait to see the drama between her Theresa and Brady

I like this hero on days of our lives i x0

She just came back to Y&R, and plays on one of the real wives show and now they say shes going back to Days. Whats up with this??

Isn’t she on one of the reality housewives show?