Days Of Our Lives Spoiler: Brady Learns Theresa Put John In A Coma Then Framed Him – Kristen and Daniel Hooking Up? 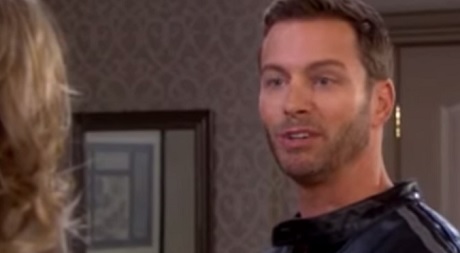 Days of Our Lives spoilers have been teasing for quite a while now that John Black is well aware of the fact that Theresa Donovan is the culprit who it him over the head and put him in a coma, not his son Brady. But, for some reason that we don’t totally understand yet, John hasn’t gone to the police, which is really bothering Kristen DiMera — because rumor has it she desperately wants to see Theresa held accountable for her actions.

According to a Days of Our Lives spoiler video for the week of October 27th, Kristen DiMera tries to rat Theresa out to Brady. But Brady doesn’t want to hear it and assumes it is another one of Kristen’s schemes, despite the fact that she has Theresa’s confession on tape. Brady heads to the Salem hospital after his run-in with Kristen, and DOOL spoilers reveal that Theresa is already in John’s hospital room and Brady overhears their entire conversation. He is shocked when he realizes that Kristen DiMera was actually telling the truth, and also devastated because Theresa betrayed him and framed him, and convinced him that he put his own father in a coma.

DOOL spoilers also tease that by the end of the week Brady and Kristen wind up in another heated confrontation, and Brady winds up pushing her in to another man’s arms. We’re not psychics, but considering the chemistry between Daniel and Kristen, and what’s left of Jenn and Daniel’s relationship implodes this week, there is a good chance we could see a Kristen and Daniel hook up very soon.

So, DOOL fans, what do you think John Black’s motives are? Why hasn’t he gone to the police yet and told them what Theresa did to him? Which Salem man does Kristen seek a shoulder to cry on from? Let us know what you think in the comments below and don’t forget to check CDL tomorrow for more Days of Our Lives news and spoilers.