Days Of Our Lives Spoilers: Pregnancy Switch – Theresa Not Pregnant But Sister Eve IS Pregnant With JJ’s Baby? 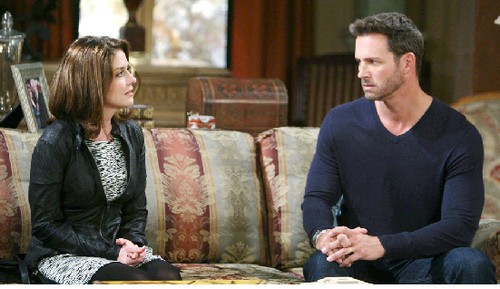 Days of Our Lives spoilers tease a dramatic confrontation between Eve and JJ later this week, and if history repeats itself, there is a good chance they could wind up sleeping with each other again. We can’t help but wonder how long will go by before Eve discovers she is pregnant with her daughter’s boyfriend’s baby. Sure, Eve is a little old to be popping out babies, but if they can take an embryo out of Theresa and implant it in Kristen, there is no reason a woman of Eve’s age can’t wind up pregnant.

When Days of Our Lives spoilers began hinting at an affair between Eve (Kassie DePaiva) and JJ, we were just as grossed out as the rest of the DOOL fans. But adding a baby into the equation would make it a perfect soap storyline, and for so many reasons. The first and obvious . . . that would mean Paige’s (True O’Brien) boyfriend is actually her step-father. Gross! Then there’s the fact that JJ’s mom Jenn’s grandchild would be the son or daughter of her arch nemesis.

So, Days fans, what do you think of the steamy affair between JJ and Eve? Are they going to end up sleeping together again? Do you think that Eve will wind up pregnant with JJ’s baby? Let us know what you think in the comments below and don’t forget to check CDL tomorrow for more Days of Our Lives spoilers and news.