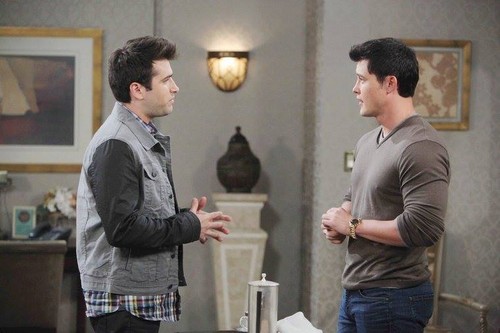 “Days of Our Lives” spoilers hint that we’ll have to say so long to Sonny Kiriakis (Freddie Smith). Serialscoop.com is reporting that Freddie Smith has finished up his time at DOOL and he’ll be moving on to other projects. Soap Opera Digest confirmed the news so it sounds like this is the end of the road for “WilSon.” It’s possible that the role could be recast, but “Days” hasn’t sent out any casting calls that point to it just yet. It seems more likely that Sonny will decide to pack up and leave Salem after his failed marriage to Will (Guy Wilson).

Of course, there’s another option that Sonny fans probably don’t want to even think about. Sonny could be—gasp!—killed off. After all, “Days of Our Lives” writers had no problem putting a few bullet holes in EJ (James Scott) in Salem’s favorite cursed park. It doesn’t seem to matter how beloved a character is as long as he or she goes out with a bang.

Whatever happens, Freddie Smith will definitely be missed on the NBC soap. Since his debut in June 2011, Smith’s portrayal of Sonny has been gripping and honest. The actor was able to shine in the subtle moments as well as the shocking reveals. Fortunately, it looks like Smith had time to wrap up his current storyline before he made his exit. Due to the taping schedule at DOOL, Sonny will be featured in episodes for the next five months. The rumors indicate that Sonny will face some heartache as he prepares to go. It’s safe to say we’re going to need tissues for Sonny’s goodbye scene with little Arianna Grace (Sydnee and Harper Udell). Stick with CDL for updates on any future casting changes on “Days of Our Lives.”

So “Days” fans, what do you think about the news that Freddie Smith is leaving? Are you sad to see Sonny go? Should they recast the character at some point or was Freddie Smith the only Sonny for you? Let us know what you think in the comments below and don’t forget to check CDL tomorrow for the latest “Days of Our Lives” spoilers, rumors, updates and news.