‘Days of Our Lives’ Spoilers: Will and Lucas Team Up to Expose Paul’s Mom – Blackmail Over Shocking Tori Picture Risks WilSon 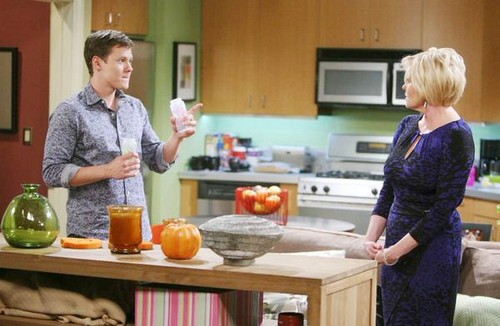 “Days of Our Lives” spoilers hint that we could soon learn more about Tori (Hira Ambrosino) and the past that she’s been hiding. DOOL Rumors have been swirling for weeks that Lucas (Bryan Dattilo) would team up with Will (Guy Wilson) to uncover a mystery. However, DOOL fans have been wondering exactly what case the father/son duo would try to crack. It seems that Will and Lucas will put their sleuthing skills to good use as they dig up dirt on Tori. Sonny (Freddie Smith) recently left town and Lucas intends on helping Will get Paul (Christopher Sean) out of the picture before Sonny returns.

They don’t know it yet, but Will and Lucas could be opening a big can of worms. It’s likely that this storyline will lead to the big reveal of Tori’s ties to Salem. “Days” viewers won’t want to miss a minute as Tori gets shocked by how far the Horton men will go.

“Days of Our Lives” spoilers tease that Will is willing to play dirty to win back the love of his life. It seems Will is about to discover an old photograph that could totally change the game. It’s not clear what it’s a photo of, but Tori will do whatever it takes to keep it a secret. Will isn’t above blackmailing if it means it’ll help him get Paul out of the way. However, Will’s plan could easily backfire if Sonny ever finds out about his husband’s shady actions. In fact, it’s probably more of a question of when Sonny will find out. After all, nothing ever stays buried too long on “Days of Our Lives.” Sonny won’t be pleased to learn that Will has resorted to blackmailing Paul’s mom to get what he wants. When Tori’s secret blows up, will the “WilSon” marriage blow up, too? Stick with DOOL in the coming weeks to see if Will’s crooked tactics will hurt his relationship more than they help.

So “Days” fans what do you think about the news that Lucas and Will are teaming up to get to the bottom of the Naritas? What will the father and son uncover and will their new knowledge rock Tori to the core? How long will Tori be able to keep her secret from Paul and the rest of Salem? Will Sonny be furious when he learns that Will is going behind his back again? Let us know what you think in the comments below and don’t forget to check CDL tomorrow for the latest “Days of Our Lives” spoilers, rumors and news.