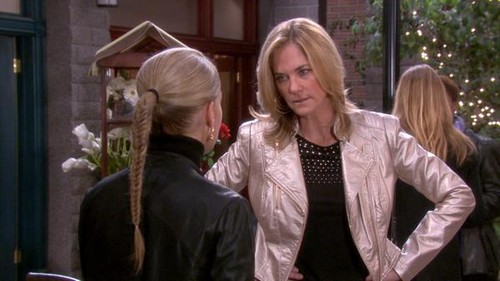 “Days of Our Lives” spoilers for Friday, March 6, tease that some big secrets and major decisions will shake things up in Salem. When Jennifer (Melissa Reeves) found out about JJ’s (Casey Moss) affair with Eve (Kassie DePaiva), she was furious. However, Jen had a long discussion with her son and she now realizes that JJ only turned to Eve in an effort to make the pain of losing Paige (True O’Brien) go away. Most would consider that to be a pretty lame excuse, but Jennifer always finds a way to rationalize the poor decisions her children make. Now Jen’s come up with a plan that could give JJ hope for another shot with Paige—that is if Eve will cooperate. Even though Jennifer means well, this second-chance scheme sure sounds like a disaster waiting to happen.

As JJ tries to keep his secret buried, Adrienne (Judi Evans) will overhear a big one on the Friday, March 6 episode. It’s unclear what knowledge Adrienne will become privy to, but there’s a good chance it could be something about Sonny’s (Freddie Smith) marriage problems. Perhaps Adrienne will learn that Will (Guy Wilson) had an affair with Paul (Christopher Sean). Then again, maybe the secret will be related to Adrienne’s own relationship difficulties. After all, Justin (Wally Kurth) doesn’t seem like he’s been completely honest since he got back in town. There are plenty of secrets floating around on any given day so DOOL fans will want to tune in to see which one comes out.

Meanwhile, Jordan (Chrishell Stause) will make a decision that will change her life. Since “Days of Our Lives” spoilers next week indicate that Jordan will say her final goodbyes, it seems she’ll decide to leave town. After all the trouble Jordan has dealt with because of Rafe (Galen Gering) and Chad (Billy Flynn), it’s no wonder she wants out of Salem. Clyde (James Reed) and Ben (Robert Scott Wilson) have been no picnic to deal with either. Keep watching “Days” to find out why Jordan’s moving on to greener pastures.

It’s not all doom and gloom on DOOL. “Days of Our Lives” spoilers for Friday, March 6, hint that Ben’s about to get some good news that could have him breathing a sigh of relief. Maybe Chad will finally make the charges against Ben go away. If that’s the case, Ben could soon have another issue to worry about. Could a grateful Abigail (Kate Mansi) grow closer to Chad? The rumors say it’s a possibility. Stick with the NBC soap to see if a love triangle is in the works.

So “Days” fans, do you think JJ deserves another chance to be with Paige? Which secret will Adrienne overhear and what will she do with the information? What do you think about Jordan leaving Salem? Will Ben’s happiness be short-lived if Chad has anything to say about it? Let us know what you think in the comments below and don’t forget to check CDL tomorrow for the latest “Days of Our Lives” spoilers, rumors and news.