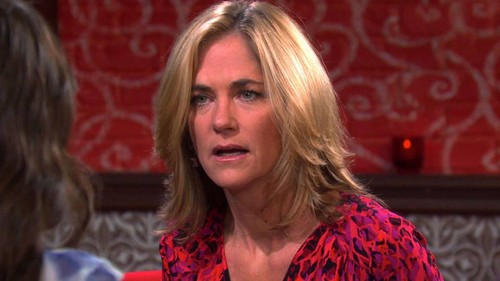 “Days of Our Lives” spoilers for Monday, March 2, tease that Tori Narita (Hira Ambrosino) is about to panic at the sight of a familiar face in Salem. Tori was already flustered by a chance encounter with Marlena (Deidre Hall) at Club TBD. Paul (Christopher Sean) could tell that his mom recognized Marlena, but he couldn’t quite get to the bottom of things. Tori managed to blurt out an excuse, but her story sounded a little fishy. Tori claimed that she checked out the psychiatric department of the hospital where Paul was having his surgery because she thought his injury might be career ending. If that was the case, Paul might need therapy to take his life in a different direction.

Was Tori really just being a concerned mom? Many DOOL fans think she’s hiding much more. Perhaps Marlena surprised Tori because of her connection to John. It’s possible that Tori could’ve had a relationship or brief affair with John at one time. Could the rumors that Paul is John’s son be true? We’ll keep you updated on the latest “Days of Our Lives” spoilers about Tori’s past.

While “Days” viewers wait on Tori’s secret to be revealed, another secret is about to turn Eve (Kassie DePaiva) and JJ’s (Casey Moss) lives upside down. They’ve been able to hide their hookups for quite a while, but we all knew someone would find out eventually. “Days of Our Lives” spoilers for Monday, March 2, indicate that the day will finally arrive. Someone in Salem will be clued in to the fact that JJ has been sleeping with Paige’s (True O’Brien) mom.

Daniel and Jennifer recently had a discussion about JJ’s erratic behavior. Maybe one of them will make the discovery. Even Paige herself could learn the awful truth. Then again, maybe DOOL writers want to save the best for last. After all, Paige is often the last to know about anything regarding JJ. In the end, it really won’t matter who finds out first. The whole town will know soon enough. The real question is: how will Eve and JJ’s affair be discovered? Check out the episode to see if Eve and JJ get caught in the act and who catches them.

So “Days” fans, what do you think about Tori spotting another familiar face in Salem on March 2? Who does she have ties to and is Paul part of that past connection? What about Eve and JJ’s affair? Who will discover what’s been going on and how will it get out – let’s bet it’s Jennifer? Let us know what you think in the comments below and don’t forget to check CDL tomorrow for the latest “Days of Our Lives” spoilers and news.