‘Days of Our Lives’ Spoilers: Tori’s Secrets Revealed – Could Paul’s Father Be Stefano, John or Even Justin? 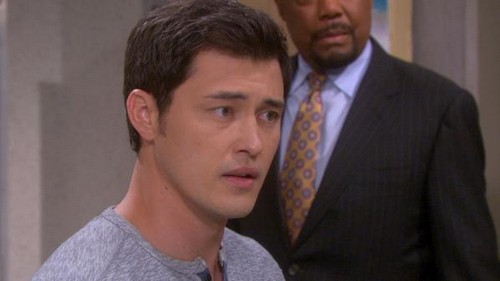 “Days of Our Lives” spoilers reveal that Paul’s (Christopher Sean) mother will arrive in Salem and she may bring more trouble along with her. Tori Norita (Hira Ambrosino) recently objected to her son’s decision to come out and she’ll be in town to convince him to head home. Now that Sonny (Freddie Smith) knows Paul slept with Will (Guy Wilson), Paul probably feels like he doesn’t have much of a reason to stick around. After all, the love of his life wants nothing to do with him. Maybe it would be best for Sonny’s marriage if Paul was out of the picture. However, Tori may have a deeper motive than protecting her son’s feelings and the “WilSon” relationship. In fact, a past relationship of her own could be causing her concern.

Other “Days of Our Lives” spoilers hint that Tori knows someone significant in Salem. Many “Days” fans have speculated that Paul is actually a DiMera or even a long-lost Black. It’s possible that Tori had a fling with Stefano (Joseph Mascolo) or John (Drake Hogestyn) during one of their many business trips. Heck, let’s throw Roman (Josh Taylor) into the mix of paternal possibilities. There’s even a rumor floating around that Paul may be Justin’s (Wally Kurth) son. Could Paul and Sonny actually be half-brothers? It might seem far-fetched to some DOOL watchers, but anything can happen on the NBC soap.

Justin had another affair that resulted in the birth of a child and his problems with unfaithfulness seem to have continued. Adrienne (Judi Evans) has a hunch that Justin hooked up with a hot, young attorney at his law firm. Maybe Justin has always kept women on the side. If Paul turns out to be related to Sonny, it would certainly be a surprise for the former lovers as well as viewers. Stay tuned to “Days of Our Lives” to learn who Tori knows in Salem and discover why she doesn’t want Paul to stick around.

So “Days” fans, what do you think about Paul’s mom showing up in Salem? Does she have a past connection to Stefano, John, Roman or even Justin? Would you be happy to find out that Paul has blood ties to another character? Would the revelation that Paul and Sonny are half-brothers be too crazy, even for DOOL? Let us know what you think in the comments below and don’t forget to check CDL often for the latest “Days of Our Lives” spoilers and news.