‘Days of Our Lives’ Spoilers: Paul Horrified Over What He’s Done to Sonny – Marlena Shocked by Paul’s Confession 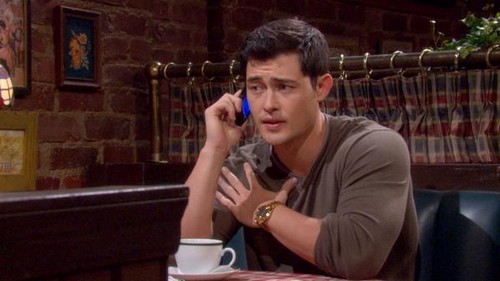 “Days of Our Lives” spoilers reveal that Paul’s (Christopher Sean) past actions will come back to haunt him once Will’s (Guy Wilson) article hits the stands. DOOL viewers know that Will’s meetings with Paul involved more than just business. The sexual tension was just too much for the pair to resist. Now the damage has been done and the ripple effect will continue throughout upcoming episodes.

“Days of Our Lives” spoilers reveal that Paul will soon learn that he slept with his old beau’s new husband. In terms of cheating, it doesn’t get much worse than that. Paul will be horrified that he may be partially responsible for Will and Sonny’s (Freddie Smith) crumbling marriage. However, Paul recently revealed he still has feelings for his former boyfriend. Could a “WilSon” breakup pave the way for a “PaulSon” reunion? Stay tuned to “Days” in the coming weeks to see who Sonny will choose.

Other “Days of Our Lives” spoilers hint that Paul will do some shocking of his own in the near future. Marlena (Deidre Hall) could sense that something was off with Paul when he was in the hospital after his surgery. Despite her repeated attempts to get him to open up, Paul turned her down. When Will’s article comes out, Paul will come out, too. He may take advantage of Marlena’s therapy offers now that he has nothing to hide. After all, Paul certainly has plenty to talk about. Marlena will surely be surprised that the man she thought was a womanizer is actually gay—and Sonny’s ex. Will she also learn the truth about Paul’s sexual encounter with her grandson’s husband? Keep watching DOOL to find out just how far Marlena’s jaw will drop.

So “Days” fans, what do you think about the shocking episodes to come? What will Paul do when he learns that he’s broken Sonny’s heart not once, but twice? Could Paul and Sonny rekindle their romance at some point? What about Paul’s shocking confession to Marlena? Will the news that Paul is gay lead to the revelation that he came between Will and Sonny? Let us know what you think in the comments below and don’t forget to check CDL tomorrow for the latest “Days of Our Lives” spoilers and news.