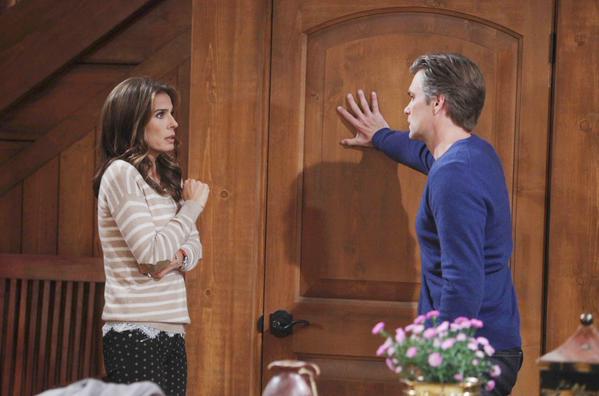 “Days of Our Lives” spoilers tease that the week of February 16-20 will be full of exciting drama and some thrilling revelations, according to DOOL rumors fans of the NBC soap will not want to miss a single episode! Rumors have been floating around for weeks that all hell was going to break loose in Salem when JJ and Eve’s (Kassie DePaiva) affair was exposed – and “Days of Our Lives” spoilers tease that during the week of February 16 JJ will become an emotional basket case and try to reason with his ex-girlfriend Paige (True O’Brien).

“Days Of Our Lives” fans have been tuning in to the NBC soap for weeks waiting for the truth to be revealed about Hope’s (Kristian Alfonso) boyfriend Aiden, and to learn whether or not he murdered his wife Meredith. And, all signs seem to be pointing to Aiden (Daniel Cosgrove) being a cold-blooded killer. “Days of Our Lives” spoilers for the week of February 16 tease that Hope and Aiden will continue to play a game of cat and mouse at Aiden’s vacation home. However, on Tuesday’s episode of the NBC soap Aiden makes a shocking confession to Hope, and it is a game changer!

“Days of Our Lives” spoilers and coming and going news confirm that Wally Kurth will return to DOOL as Justin Kiriakis on Tuesday February 17. However, Adrienne and Lucas have no idea Justin is back in Salem, and while he is out looking for his wife – Adrienne is busy sharing a passionate moment with Lucas Horton (Bryan Dattilo). In other “Days of Our Lives” news, spoilers reveal that during the week of February 16 fans can also expect to see Will Horton’s world come crashing down around him, along with his marriage. And, Serena (Melissa Archer) has to up the ante in her little scheme when her beau Eric’s life is in danger because of her.

So DOOL fans, do you think that Hope is in danger? Is Aiden really a murderer, or is there more to the story? Will Justin catch Adrienne and Lucas, how will he react when he learns that while he was off cheating on Adrienne she was doing some extracurricular activities of her own? Will Serena be able to save Eric? Let us know what you think in the comments below and don’t forget to check CDL tomorrow for more “Days of Our Lives” spoilers and news.