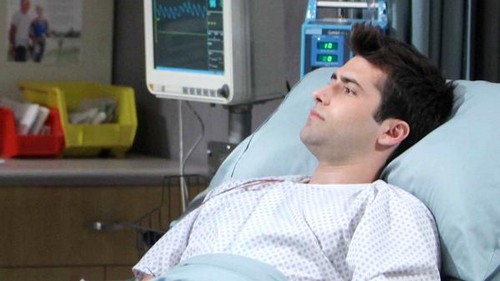 “Days of Our Lives” spoilers for the February 16-20 tease another action-packed week in Salem and rumor has it DOOL fans will not want to miss a single episode of the NBC soap. One of our favorite Salemites will find herself in serious danger, and the complicated relationships in Salem get even more complicated. According to “Days of Our Lives” spoilers this is what fans can expect to see during the week of February 16.

Monday February 16: “Days of Our Lives” spoilers tease that on Monday’s episode of the NBC soap the mystery of Aiden’s wife’s death finally comes to a head at the isolated vacation home where Hope (Kristian Alfonso) is stranded, and rumor has it Hope is in serious danger. Is Aiden a cold-blooded killer, or is this all a huge misunderstanding? Spoilers indicate that Aiden’s wife pulled a ‘Gone Girl’ and framed Aiden for a crime he didn’t commit.

Tuesday February 17: According to DOOL spoilers for February 17, “Days of Our Lives” fans will not want to miss the Tuesday episode. Aiden (Daniel Cosgrove) finally makes a shocking confession to Hope regarding Meredith’s suspicious death. Back in Salem Will’s article about Paul (Christopher Sean) hits the newsstands, and creates some unexpected drama. Then again, is Will capable of writing an article that doesn’t cause all hell to break loose?

Wednesday February 18: On Wednesday’s episode of “Days of Our Lives” JJ Deveraux finds himself back at Eve Donovan’s (Kassie DePaiva) house and he is an emotional basket-case. Despite everything that has happened he just can’t seem to stay away from Paige’s (True O’Brien) mom. In other DOOL news, the drama with Aiden and Hope continues and the Salem detective realizes what she is really dealing with.

Thursday February 19: “Days of Our Lives” spoilers tease that on February 19th Serena’s scheme blows up in her face when Eric’s life is put in danger. Serena (Melissa Archer) isn’t the only Salem resident that is forced to pay the piper, Will finds himself on the receiving end of an epic blow-up.

Friday February 20: Spoilers for the February 20 episode of “Days of Our Lives” reveal that DOOL fans can expect to see Will Horton’s world come crashing down around him. Also, Justin Kiriakis (Wally Kurth) is back in Salem and looking for his wife Adrienne, unfortunately she is a bit pre-occupied and in the middle of a hot make-out session with Lucas (Bryan Dattilo).

So Days fans, are you as excited as we are to finally have the Aiden mystery resolved? Do you think that he killed Meredith, or is it all a misunderstanding, perhaps a sinister plot in which Aiden is the victim? Is Hope in serious danger or just paranoid? Will Justin catch Adrienne and Lucas together? Let us know what you think in the comments below and don’t forget to check CDL tomorrow for more “Days of Our Lives” spoilers and news.