‘Days of Our Lives’ Spoilers: Stefano’s Secret Son – Could Paul Norita Really Be a DiMera? 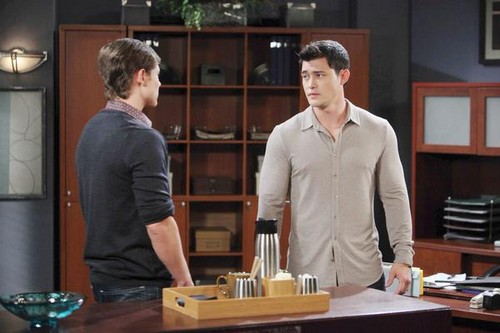 There’s perhaps no family in Salem that’s more powerful than the DiMeras. It seems Stefano (Joseph Mascalo) could be adding to his brood soon. “Days of Our Lives” spoilers hint that Paul Norita’s (Christopher Sean) backstory may be a lot more complicated than it seems. Some popular theories have been circulating about his parents and one of them seems to point to Stefano as his father. If that rumor turns out to be true, it could really shake things up on DOOL. Many “Days of Our Lives” fans have been pleased with Sean’s performance and making Paul a DiMera would open up a world of new storylines for the character.

It’s tough to say how Stefano would react to finding out he has another son. There’s even the possibility that he’s known all along. However, if his offspring commits to loyalty, he’s usually willing stand behind anyone who takes the DiMera name. Once Paul’s affair with Will (Guy Wilson) is revealed, things are sure to get interesting on “Days of Our Lives.” Paul claims to care deeply for Sonny (Freddie Wilson) and losing him forever would likely incite some strong emotions. He could end up feeling alone after coming out of the closet and being disowned by his very traditional family. “Days” fans might enjoy seeing Paul become a bit of a bad boy as Stefano takes him under his wing.

Of course, every DOOL viewer has a different opinion and some people seem to think Stefano has had enough children come out of the woodwork. Still, there’s no denying that the twist could create some attention-grabbing scenarios and explosive episodes down the road. Adding a DiMera might be just what the NBC soap needs to stir up a bit of interest and give the ratings a boost.

So “Days” fans, what do you think about this exciting theory? Could Paul really be a DiMera? If so, how will Stefano react? Will he embrace his newfound son with open arms or insist that Paul stay away from his family? Is it possible that Stefano has been keeping his extra son a secret for all these years? Let us know what you think in the comments below and don’t forget to check CDL tomorrow for the latest “Days of Our Lives” spoilers and news.