‘Days of Our Lives’ Spoilers: Secrets Surface as Justin Returns, Adrienne and Lucas Get Close, Hope Haunted by Meredith’s Ghost? 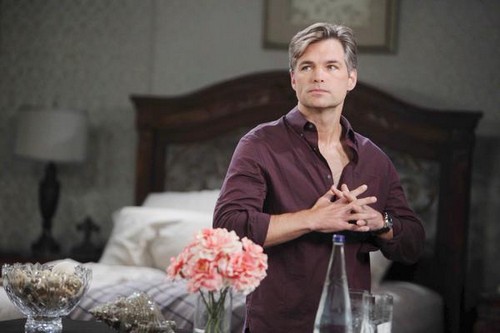 “Days of Our Lives” spoilers reveal that Justin (Wally Kurth) will return soon and he’ll bring some DOOL secrets along with him. It seems that business wasn’t the only thing on his mind while he was away. With rumors swirling that Justin has been having an affair, he could join the long line of people who are cheating in Salem. Adrienne (Judi Evans) and Lucas (Bryan Dattilo) could even be added to the list if their friendship becomes something more. Many DOOL viewers have been rooting for Lucas to get a love interest and this could be the storyline they’ve been waiting for. While some might disagree with the new pairing, it should give the “vets” and fan favorites a bit more airtime than usual. Keep watching to see what “Days of Our Lives” writers have in store for the unlikely couple.

Aiden (Daniel Cosgrove) has also been struggling to keep a few secrets buried. However, nothing stays hidden too long on “Days.” DOOL spoilers hint that Hope (Kristian Alfonso) will join Aiden on a brief vacation at his old beach house. Word has it that Hope will be spooked at the sandy spot and really, who could blame her? A trip to a secluded location with a man who was once suspected of murder doesn’t exactly sound like a relaxing getaway.

She’ll likely be left wondering what kind of man Aiden actually is and whether his wife’s death was truly a suicide. With the recent casting news of Julie Tolivar as Meredith, it’s possible that we could even see Hope haunted by her ghost. “Days of Our Lives” could use a boost in the ratings this year and a ghost sighting might be a fun twist for February sweeps. Whatever happens, viewers will be glued to their screens as this exciting storyline takes a dramatic turn.

So “Days” fans, do you think Justin has been unfaithful? Will Adrienne and Lucas make a good pair? What about Hope’s trip with Aiden to his creepy beach house? Will Meredith’s ghost make an appearance? Could Hope become Aiden’s next victim or is Meredith orchestrating an elaborate scam? Let us know what you think in the comments below and don’t forget to check CDL tomorrow for all the latest “Days of Our Lives” spoilers and news.