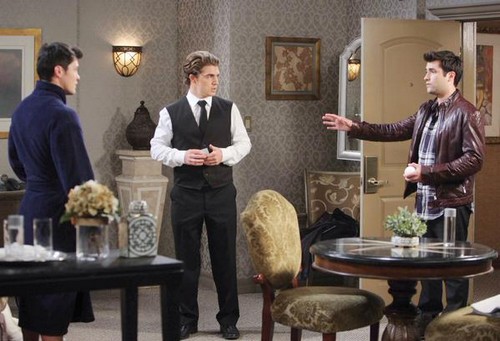 “Days of Our Lives” spoilers for the week of January 12 – 16 tease more exciting drama in Salem, and rumor has it DOOL fans will not want to miss a single episode of the NBC soap. Spoilers have been teasing an epic love triangle between Sonny Kiriakis, Will Horton, and Salem newcomer Paul Norita – and on Monday January 12 the tables are turned again. When Paul first arrived in Salem he pursued his ex Sonny (who turned him down), then he hooked up with Sonny’s hubby Will, now according to “Days of Our Lives” spoilers Paul will go after Sonny again on January 12 and try to win him back.

Paul, Will, and Sonny are not the only residents with romantic woes in Salem during the week of January 12. “Days of Our Lives” spoilers have been teasing that Melanie Jonas would hook up with Brady Black since she returned to the NBC soap in 2014. During the week of January 12 the former BFFs-turned-lovers will decide to officially date each other; however, they plan to keep their relationship a secret. According to “Days of Our Lives” spoilers, their plans go awry when someone catches them in a hot and steamy kiss.

“Days of Our Lives” spoilers for January 12 – 16 also tease that Clyde will continue to harass Jordan and reveal a shocking secret to her about her mother’s death. In other DOOL news, Adrienne and Lucas continue to bond and spend time together, and Adrienne discovers that she is actually developing feelings for her new confidante. Also, “Days of Our Lives” spoilers tease that fans can expect to see Victor and Clyde have a war of words, and the rivalry between Eve and Jennifer heats up. Rumor has it that Jennifer will learn that her nemesis seduced her son JJ.

So, DOOL fans, how do you feel about the love triangle between Sonny, Will, and Paul? Will Sonny wind up with Paul after his old boyfriend cheated with his husband? What secret does Clyde share with Jordan? Do Adrienne and Lucas make a cute couple? Let us know what you think in the comments below and don’t forget to check CDL tomorrow for more “Days of Our Lives” spoilers and news.