‘Days Of Our Lives’ Spoilers: Paul Has Sex With Will – Did Paul Seduce Will To Break Up Sonny’s Happy Marriage? 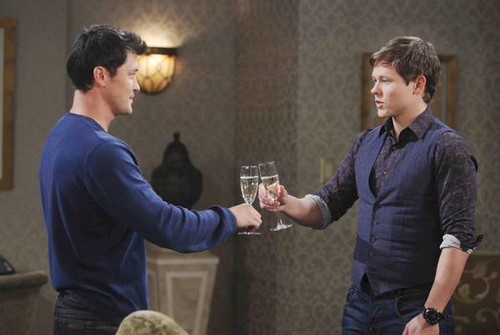 “Days Of Our Lives” spoilers have been teasing that a major cheating scandal would rock fan favorites Will and Sonny’s marriage. When “Days of Our Lives” coming and goings revealed that Salem newbie Paul Norita was an old flame of Sonny’s – we all assumed that Sonny was going to cheat on Will with the pro ball player. But, DOOL spoilers reveal that it is actually the going to be the other way around, and Will is going to cheat on Sonny with Paul Norita!

Sparks have been flying all week between Will and Paul Norita, and Days of Our Lives spoilers reveal that on Friday January 9 Sonny will stop by Paul’s hotel room and catch him with Will. DOOL fans assumed that Sonny would just walk in on a hot and steamy kiss between his hubby and old flame. But, according to “Days Of Our Lives” spoilers from Soap Opera Digest, Will actually has sex with Paul Norita!

So, who is to blame for the cheating scandal, Will or Paul? Rumors have been flying around that internet teasing that Paul knows Will is married to Sonny and he hooks up with them to break the couple up. But, according to DOOL spoilers from Paul’s portrayer Christopher Sean in a Soap Opera Digest interview – that isn’t the case at all.

When discussing Will and Paul’s affair Christopher Sean explained, “Paul is not the villain in this triangle. Sure, he has animalistic urges and he pounced, but it’s Will who was easily swayed. Will has bitten off more than he can chew. He wanted that forbidden fruit! The only thing Paul is guilty of is wanting human connection. He wants love. That’s why he reached out to Sonny and now he’s seeking comfort from Will and there’s nothing wrong with that. It’s a basic human need. He has no idea he’s having sex with his ex-lover’s husband. Paul thinks Will is single. He’s not wearing a wedding ring. [Laughs] Will’s the bad guy!”

What do you think DOOL fans? Are you as shocked as we are that Will is going to cheat on Sonny, or did you think their relationship was doomed from the start? Is this the end of Will and Sonny, will they get a divorce? Let us know what you think in the comments below and don’t forget to check CDL tomorrow for more “Days of Our Lives” spoilers and news.